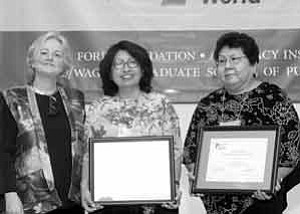 NEW YORK -- On Oct. 6, the Ford Foundation announced the 2005 winners of the Leadership for a Changing World awards , are individuals and leadership teams tackling some of the nation's most entrenched social, economic and environmental challenges. A national selection committee chose the 17 awardees from a pool of nearly 1,000 nominations

"These leaders are a welcome reminder that people can make a difference," said Susan V. Berresford, president of the Ford Foundation. "They have brought not only concrete gains to their communities but a determination to stand for justice that builds hope and inspires others. It's never been more important to listen to them."

With a deep belief in the Hopi concept of 'Itam naap yani' (doing the work ourselves), Barbara Poley and Loris Ann Taylor merge Hopi ways with community activism to create non-traditional approaches to community needs. Their commitment to Hopi cultural values and their untiring work, has helped the Hopi Foundation they created become a successful vehicle for the Hopi to determine their own destiny.

Each awardee will receive $100,000 to advance their work and an additional $15,000 for educational opportunities to strengthen their individual or organizational effectiveness over the course of two years.