Bulldogs down Safford in second round 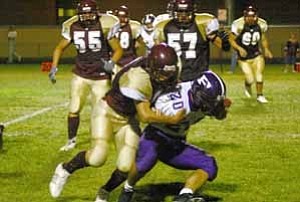 <i>Photo from archives</i><b>Bulldog Mark Armao, shown here in a game against Payson, ran four yards to score and got the two-point converison on a pass from Matt Oso during the state semi-finals game against the Safford Bulldogs last Thursday.</b>

The Winslow Bulldogs advanced to the semi-finals of the Arizona State 3A Conference Football Championship Playoffs with a 21-14 win over the Safford Bulldogs in Mesa on last Thursday. The win sent Winslow into a semi-finals match up with the top rated Blue Ridge Yellowjackets on Friday. Winslow improved its record to 11-1 for the season and Safford saw its season end with a 12-4 record.

Winslow scored the only points of the first quarter when Dillon DeWitt plunged into the end zone from a yard out with 2:05 left in the period. Kyle Holland converted for a 7-0 lead. The Bulldogs had missed a golden scoring opportunity on their previous possession when they lost a fumble on the Safford one to end a 69 yard drive in disappointment. The defense held and Winslow took over at the Safford 42 to start the scoring drive.

Safford took advantage of a Winslow fumble at the 28-yard line and scored on a one yard run by Manny Jurado. The conversion tied the game at 7-7 with 9:52 left in the half. The score was set up by a 24 yard pass from Justin Gaethye to Andrew Angel.

Safford took a 14-7 lead with four minutes left in the half on a six-yard run by Jurado. The key play in that 42 yard drive was a third down pass from Gaethye to Angel.

Winslow regained the lead with 2:07 left when Jordan Payne ran four yards to score and a two-point conversion pass from Matt Oso to Mark Armao gave the Winslow Bulldogs a 15-14 lead that remained unchanged until the final period.

Winslow missed another golden scoring opportunity when a 68-yard drive ended with a lost fumble at the Safford 12 near the end of the third quarter. Payne intercepted a Safford pass to blunt a Safford Bulldogs drive early in the final period.

The final score of the game was set up when Johnny Butler sacked the Safford quarterback and caused a fumble that was recovered by DeWitt at the Safford 11. Three plays later Payne scored on a four yard run. The conversion failed and the 21-14 score was on the board.

Winslow will meet Blue Ridge at 8 p.m. on Friday at Mesa Community College in the second semi-finals game. The Yellowjackets reached their berth with a hard fought 14-6 win over the Fountain Hills Falcons. The first semi-finals game is slated for 5 p.m. on the same field between Coolidge and Wickenburg. The Coolidge Bears advanced with a 34-7 win over the Round Valley Elks. The Wickenburg Wranglers reached with a 55-7 trouncing of River Valley.

Bulldogs take first round of 3A State Conference, defeat Scorpions 42-19
Bulldogs move on to state finals
Bulldogs to face Yellowjackets in state semi-finals
Bulldogs run season to 2-0
It will be Bulldogs vs. Coolidge at state
Event Calendar