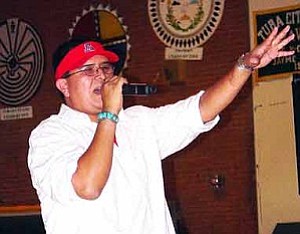 TUBA CITY — Red Ribbon Week is celebrated nationally recognizing that substance abuse along with its negative and often dangerous lifestyle must be addressed daily with positive, proactive prevention methods to keep students safe and moving towards a productive, sensitive and drug free future.

Gabriel Yaiva, a Hopi/Navajo hip-hop artist was a featured performer during the Red Ribbon week activities at Tuba City District giving a frank discussion about his own personal conflict with drugs and gang violence during his younger years in Shiprock on the Navajo reservation.

Yaiva related to the TC Junior High students his high school drinking and gang activity, that eventually led to his almost fatal stabbing.

“The light bulb moment for me came when I was lying in the emergency room with my mom praying over me, hoping I wouldn’t die from the knife wounds to my stomach,” he said.

Yaiva has since cleaned up his act, quit all alcohol and drug activity for the past 10 years and started hitting the books which will result in a bachelor of arts degree from Northern Arizona University this coming May 2006 in both American Indian Studies and Economics.

Yaiva’s Red Ribbon performance for Tuba City Junior High students included asking their students to take the spotlight to highlight either their own singing or dancing abilities, what is sometimes called the brief “15 minutes of fame.”