Flags at half-staff for R.C. Gorman
President calls Mr. Gorman the ‘Picasso of the Southwest, child of the Navajo Nation’ 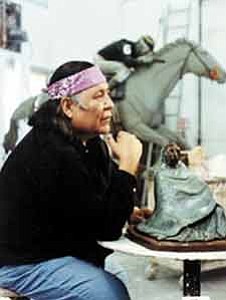 Mr. Gorman passed away peacefully on Thursday in Albuquerque after having been hospitalized with a bacterial blood infection.

Mr. Gorman was in the hospital for nearly seven weeks. The infection resulted in multiple complications including pneumonia, kidney failure and coma from which he never recovered, according to a family statement. He was first admitted to Holy Cross Hospital in Taos and then transported to intensive care at UNM Hospital on Sept. 24.

Perhaps one of the best-known and internationally regarded Navajos of the last 50 years, President Shirley called Mr. Gorman “a child of the Navajo Nation” and said he was a grandfather to him by clan and will be missed by legions of admirers and the Navajo people.

“It’s a big loss,” the President said. “He’s going to be sorely missed. He contributed greatly to the great name of the Navajo Nation. He afforded us the opportunity to talk about ourselves to the world. When they talked about him, they talked about us also.”

A public funeral service was slated for 10 a.m. Monday, Nov. 7, at the Sagebrush Inn Convention Center, 1508 South Santa Fe Road in Taos. A reception followed the service at the convention center.

Mr. Gorman will be buried in a private ceremony near his home at El Prado, N.M. In lieu of flowers, donations to the R.C. Gorman Foundation are welcome. Inquiries or donations can be sent to Navajo Gallery, P.O. Box 1756, Taos, N.M. 87571.

Mr. Gorman, who began to draw at age three, was known for his beautiful paintings and sculptures of graceful female figures, often depicted as generously sized and draped in a blanket.

“I revere women,” Mr. Gorman told the Associated Press in 1998 at his studio north of Taos. “They are my greatest inspiration.”

Mr. Gorman, who was Clauschii’ (Red Bottom People) born for Dibåézhíní (Black Sheep People0, was born as Rudolph Carl Gorman on July 26, 1931, in Chinle. He was known as R.C. throughout his career. He grew up on the Navajo Nation.

His parents were the late Carl Nelson Gorman, an artist and well-known Navajo Code Talker, and Adella Katherine Brown. He was raised by his mother and maternal grandmother, Zonnie Maria Brown at Black Mountain.

Ms. Gorman said her brother was a role model for young Native Americans who want to pursue art, business or any kind of dream.

“He showed that nothing is impossible for Native people and that we can do it on our own terms and say it in our own way,” she said in a statement. “Many people remember our father, Carl Gorman, mostly for being one of the original first 29 Navajo Code Talkers but he was also one of the early Indian artists to break away from what was called Indian art. In his own way, he opened a lot of doors for his son, R.C. In turn, R.C. has flung those doors wide open for current and future creative endeavors for native people.”

Mr. Gorman was the oldest of five children who survive him. They are: Don Mitchell from Chinle, Donna Scott, from Chinle, Shirley Beecher from Black Mountain, Carla Anderson from Kaibeto, and Zonnie Gorman from Gallup, N.M.

In 2003, Mr. Gorman presented Diné College in Tsaile, Ariz., with more than 1,200 works amassed over a lifetime of artistic study and achievement. On July 26, 2003, Diné College held a special event honoring Mr. Gorman on the occasion of the opening of the R.C. Gorman Library built to house his literary collection.

The R.C. Gorman Library incorporates a traditional Navajo east entrance and showcases original artwork of Mr. Gorman1s, including a bronze bust of his father, one of the original Navajo Code Talkers who served in World War II.

The project has been instrumental in preserving Navajo language, history and culture, and offers the public and Diné College students an invaluable resource for educational research

“I consider the guiding philosophy of Diné College, sa1ah naaghaíí bik1eh hózhóón, as precious and important to Navajo identity and cultural pride, a philosophy which has resulted in valuable contributions made by Navajo people to the world,” Mr. Gorman said at the time.

Women, particularly his maternal grandmother, were considered to be Mr. Gorman1s primary influences and remained the focus of most of his paintings and prints.

His grandmother spent much time with him herding sheep during his childhood. It was from her he learned Navajo traditions, song, prayers and he learned about plants and animals.

Mr. Gorman first attended Chinle Public School. He attended school at St. Michael’s and Ganado Mission School. Many years later, in 1978, The College of Ganado awarded Mr. Gorman an honorary Doctorate of Fine Arts, which he later said was the highest honor he had received.

Mr. Gorman attended Northern Arizona University in Flagstaff from1950-51 and 1955-56 to study literature and art, without receiving an undergraduate degree. NAU awarded him an honorary doctorate of humane letters in 1990. In 1951, he enlisted in the U.S. Navy for four years during the Korean War but never quit drawing.

In 1962, he left Navajoland for San Francisco where he exhibited his work. In 1964, he went to Taos but returned to San Francisco. He eventually made his home near Taos.