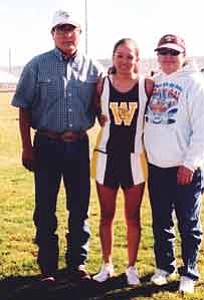 The Chinle girls barely missed a trip to state as they took fifth place with 87 points. The rest of the field showed Tuba City, sixth, with 151 points and Monument Valley seventh with 422 points.

Ganado had the third through fifth spots with Marilyn Curley, Alandria Reid and Tierra Blacksheep finishing in that order.

Ganado Coach Francis Ambrose said the Lady Hornets won the race because they relaxed and stayed in contact with each other in order to pack together.

“It feels good for me to win regional for the first time, but I’m proud of the girls, especially my senior,” he said.

Blacksheep, who placed fifth, was the lone senior running for Ganado.

“Tierra did an outstanding job and had a strong finish. My hat is off to her,” he said.

Ambrose said the key to Ganado winning was a lot of collaboration between the girls and teamwork.

Ambrose said regional was a good assessment for state as Ganado also hopes to repeat as state champs.

“We can’t underestimate any team. Any of them can come up at state,” he said.

Ambrose said the toughest competition at state will come from the 3A North and the South, rather than the East or West teams.

Ambrose commended Hopi for doing a good job of coordinating the event.

“A lot of the community and parents came out. It made it better and it was a fun event,” he said.

The top four teams and the top 15 runners qualify for state.

Hopi’s Matt Lamson, a junior, won the race with a record time of 16:22 seconds. He broke the record set by former Hopi High runners Devin Lomayaoma and Juwan Nuvayakova of 16:47.

The other members of the regional championship team for Tuba City were Sherman Dallas, 19th; Nichlas Morgan, 20th; and Kevin O’Connor, 26th.

“It feels good to win regionals, but we need to refocus and go for the big one,” he said in reference to the state race coming up this Saturday in Phoenix.

Goatcher said the Warriors won regional because of hard work and an improved training regiment.

“Our boys ran with a lot of Tuba City pride. They ran with the hearts of lions and showed that they were hungry to win. They deserve all the credit,” he said.

Goatcher noted that his team placed third at regional last year, but added they wanted to win more this year.

“We were really focused and prepared in a smart way this year,” he said.

Goatcher said Tuba City’s toughest competition at state would probably come from the 3A North. He added that Hopi High couldn’t be counted out because of its tradition.

Hopi High Coach Rick Baker wishes that the rest of his team did as well as Lamson.

Lamson not only was the individual boys champion in the 3A North Conference 53 runner race, but also broke the course record by 25 seconds.

The rest of the Hopi boy’s team didn’t fare as well as Hopi High boys finished in fourth place just barely qualifying as a team for the state cross country competition.

Coach Baker said he thought Hopi would do better at the regional meet.

“I’m just glad we qualified for state,” he said.