Protecting and profiting from history 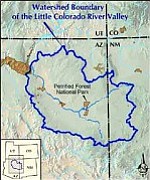 In the following 130 years, railroads and Route 66 would bring millions more people to see the unique natural and cultural heritage of Northern Arizona.

Because of the historic and contemporary cultures that occupied the Little Colorado River (LCR) Valley and because of its unique landscape, the LCR watershed is being considered for designation as a National Heritage Area.

If the U.S. Congress determines the area merits the designation, then private and public landowners will be eligible to receive up to $10 million for projects that protect and promote the uniqueness of the region.

Dr. Anne Goldberg, Heritage Consultant for the Center for Desert Archaeology in Tucson, said the process is in the beginning stages and she is travelling the area to build interest and awareness. She plans to discuss the issue with Winslow’s City Council at the May 24 meeting.

The area under consideration follows the LCR from its source near Springerville to where it empties into the Colorado River as well as its tributaries that cover the area from Flagstaff to Gallup, N.M.

Winslow is considered an ideal representative city for a National Heritage Area due to its history with Brigham City, Homolovi Ruins State Park, Route 66 and the railroads.

A National Heritage Area can receive up to $10 million in federal matching funds over 15 years. Congress decides if the designation is warranted. If it is, then control of the projects is completely local. The federal government does not gain additional authority over public or private land.

“It doesn’t change any land ownership and doesn’t have any regulatory authority as far as restricting what private landowners can do,” Goldberg said.

Instead, a local board representing interested parties would have authority to decide where and how the money is spent. The only restriction is that the money cannot be used to purchase land.

Homeowners would still be able to tear down old buildings on their properties, or sell or develop their properties, but with the National Heritage Area designation, they would have a bigger pot of money from which to draw.

The designation also has shown to pump more money into local economies. Some areas have seen the average length of visits and the average amount spent by each tourist more than double within 10 years.

“There was a study done that found for every one dollar in federal matching funds, National Heritage Areas were able to leverage an average of nine dollars,” Goldberg said. “It became a catalyst for economic development from private donors, individuals, foundations and local governments. Once you get that federal funding in there, it’s really a trigger for ten times as much money.”

For those National Heritage Areas that obtain the full $10 million over 15 years, an average of $100 million could be added to their local economies largely from projects that result in increased tourism and related economic benefits.

National Heritage Areas are unique in themselves in the Western United States. Only 27 exist so far with just two west of the Mississippi River. One of those two is in Arizona.

The Yuma Crossing National Heritage Area covers about 5,500 square miles in southwest Arizona and was designated because it was an important landmark for westward expansion in the 19th century.

Goldberg said the Center for Desert Archeology recently finished a feasibility study for the Santa Cruz Valley, which is on its way to Congress for approval. With its history of Spanish Missions and ranching, the region could become the first National Heritage Area along the Mexican border.

A feasibility study of the LCR watershed could take about two years to complete, Goldberg added.

Dr. Anne Goldberg is seeking ideas and comments about proposing the Little Colorado River watershed region for a National Heritage Area. Contact her at 520-882-6946 or e-mail her at agoldberg@cdarc.org.

For more information about existing National Heritage Areas, visit www.cr.nps.gov/heritageareas or the Center for Desert Archaeology at www.cdarc.org on the Web.

This map shows the area under consideration for designation of a National Heritage Area.