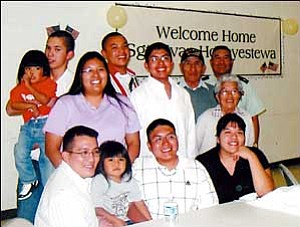 Courtesy photo Proud family members surround Evan Honeyestewa at a welcome home feast in the village of Acoma. He is also pictured with his uncle Carl and his grandfather Luther Honeyestewa who is a Korean Veteran.

Sgt. Evan Honeyestewa, of the New Mexico National Guard 642 Maintenance Company based in Fort Bliss, Texas, returned from Taji, Iraq., returned to the states on March 30. On April 3, the pueblo of Acoma celebrated its soldier’s return through a family gathering in the Governor’s Auditorium.

Sgt. Honeyestewa and his uncle Carl Honeyestewa, who prior to this served with the United States Marine Corp as staff sergeant with the 1404th Transportation Co 544 Maintenance Base at Camp Speicher in Tikrit, Iraq, are both currently on leave and face the possibility of being called back.

“The highlight of the mission was coming back home safe,” Evan said. “Everyone had a difficult times there. The Governor of Acoma and the Mayor of New Mexico said they were extremely proud of their troops. The last time they had this type of gathering was when they sent their people to Vietnam.”

He also said that family support was very important, appreciated and deeply felt through the respect they received.

On April 23, Evan received a traditional Hopi welcome home, including a hair washing and Hopi naming ceremony. In the Hopi culture, the paternal grandmother and aunts have the privilege to wash a newborn baby’s hair, a new initiate or a returning warrior.

The idea is to bless him or her to live a long prosperous life and give him or her a Hopi name according to the paternal grandmother or godmother’s clan.

Evan received the name “Nat’wani,” meaning a variety of all Hopi food, from his paternal grandmother, as well as other Hopi names from his aunts.

(Esther Honeyestewa, is a northern Arizona writer who resides in Hotevilla.)