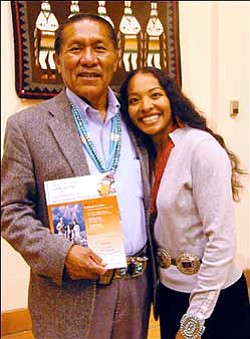 S.J. Wilson / Observer James Peshlakai, along with his niece, Radmilla Cody, attended the ECHOES benefit art auction at the Museum of Northern Arizona on the evening of May 6.

In an effort to reestablish Navajo language and culture, members of the Navajo Medicine Man Association are conducting Beauty Way Ceremonies at the four sacred mountains that stand as the boundaries of the ancestral Navajo homeland.

According to Daniel Peaches, a medicine man from Kayenta, the ceremonies are being conducted to “carry on the long traditions of the Diné people who conducted these ceremonies at the bases of the sacred mountains to bless their people, their land and their way of life.”

Concerned about losses suffered by the Diné people—including language, culture, tradition, land, resources, water and kinship bonds, Peaches expressed hope that these ceremonies will restore the “power of the mountains.”

The second ceremony began the evening of April 16 at Mount Taylor in New Mexico. The Laguna and Acoma Pueblos provided yellow corn, bread and hard goods for the ceremony.

Peshlakai, selected to coordinate the ceremony at Doo’koo’osliid– the San Francisco Peaks – is from Cameron.

“The organizers of the event are concerned that Navajo grandchildren can no longer communicate with their grandparents,” Peshlakai said in an interview on April 20. “Parents and grandparents have failed to teach the children their language.”

This, Peshlakai said, has caused a breakdown in communication of traditional teachings. Without the teachings of their grandparents, many children no longer know right from wrong, Peshlakai said.

“This is not the fault of the children—they are innocent.”

Peaches will lead the activities that will span four days, including the two-night ceremony, scheduled to begin June 11.

It is open to all Navajo people and medicine men that do ceremony are invited to participate.

Volunteers are needed to assist in the building of shades, canopies and other structures involved in the ceremony. Peshlakai has scheduled a planning meeting on May 19, and a working weekend for May 22-23. Volunteers are also needed to provide traditional security for the event.

The group is also seeking donations of natural plant foods.

“There will be no butchering on site,” Peshlakai said. “We don’t want blood involved. A long time ago, people did ceremonies three to four miles from the mountain,” he continued. “Today, we go closer because of the highway. We don’t want ambulances or vehicles that might contain injured people to pass between the mountain and the people involved in the ceremony.”

Hopi Tribal members will prepare white corn, bread and hard goods to assist with the ceremony.

“These things will be carried through an area where no one has spilled blood, where no accidents are known to have occurred.

Strict rules of conduct will include the prohibition of cameras and other recording equipment.

This is to be a Beauty Way; there will be no drugs, alcohol or weapons—including knives, according to Peshlakai.

This will also be an educational event, as people will be revisiting stories of the people and the San Francisco Peaks. There will be handouts available as well.

“It is a great honor for me to be asked to coordinate this event,” Peshlakai said. “We hope to include as many people as possible.”

For more information about the site location, or to volunteer goods and services, contact James Peshlakai at 928-606-3187.