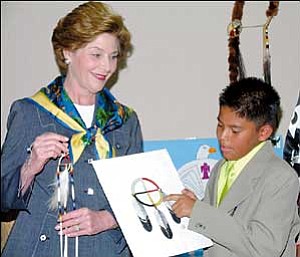 PHOENIX—Aliza Friesson anxiously perched next to the front door of the Native American Community Health Center on a bright spring day, a bright blue Pendleton blanket clutched in her arms. The sixth grader, a Tohono O’odham girl, had been selected to present first lady Laura Bush with the blanket robe during her first visit to NACHC.

When asked how she felt, Friesson, resplendent in a lavender traditional O’odham dress, ducked her head and shyly said, “excited.”

Bush toured NACHC and the Heard Museum on April 26 to promote Helping America’s Youth, the White House’s new youth enrichment program, and to praise similar programs aimed at Native youth. The initiative, launched March 7, aims to help young people become better connected to their parents, family, school, community and faith while guiding them toward sound decisions about drug, commercial tobacco and alcohol use. A White House summit on the new initiative is planned for this fall.

The first lady, a longtime proponent of education and the founder of programs such as “Ready to Read, Read to Learn” was welcomed to NACHC with an honor song. Piersten Doctor (Navajo), 11, Stefin Lee (Navajo), 10, and NACHC cultural consultant Gary Rush, who runs NACHC’s Red Road Youth Empowerment Project, sang and drummed as Bush and her entourage looked on. Ty Treetop (Navajo/Lakota), 13, performed a grass dance for Bush.

All six youths are members of or graduates of the after-school program, which combines native cultural values with a prevention and wellness program.

“I’m very pleased that Mrs. Bush includes Native Americans in this new initiative,” said Rush. “We face the same problems in this society as all Americans, so it’s great that she came to talk to us.”

Francine Lee said she was “very inspired” by Bush’s leadership in promoting healthy families and youth, and that Helping America’s Youth “helps out the community for Native Americans.”

After touring NACHC’s facility and meeting with NACHC Executive Director Marc Harrison and Board Chairperson Marlyne Gentry, Bush looked over a series of exhibits that the youths had crafted for her visit.

Doctor, sporting a chartreuse satin shirt and matching tie selected especially for the occasion, presented the first lady with a hand-crafted medicine wheel and a drawing of another. The fifth grader carefully explained its meaning to a rapt Laura Bush. The first lady also spent time speaking with each young person about their projects, which include family shields, shawls, artwork and other native items.

Next, it was off to the Heard Museum, where Bush met with more than 300 tribal officials, youth and other invited guests. Tekala, a sophomore at a local high school, introduced the first lady, who spoke on her new program.

“Tribal youth face the same challenges that other kids in America face,” said Bush. She acknowledged that “tribal youth who live in big cities like Phoenix can become disconnected from their culture.”

Bush also noted that, just as all other parents, Native Americans are concerned about the next generation.

“Native American parents worry about their children using drugs or alcohol. They worry about sexual activity that can lead to early pregnancy or sexually transmitted diseases. They worry about violence, a fear that was heightened by the recent tragedy at Red Lake High School in Minnesota,” said the first lady.

But she said there is hope for Native American youth.

“The strong inter-generational ties of Native American culture are a great benefit for children,” Bush stressed.

“The goal of Helping America’s Youth is to help children make healthy decisions in their lives so they can grow up to be successful and healthy,” she said.

Bush remarked that one of Salt River’s drug court graduates, a young woman named Amber, credited the program with helping turn her life away from drug addiction and put her on the road to a better life for herself and her children.

“Children want us in their lives and children need us in their lives,” said Bush. “And as I’ve learned today from the remarkable men and women I’ve met, each of us has the power to make the difference in the life of a child.”