Another successful year for CACY’s Stars in the Desert 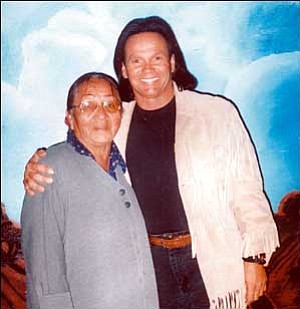 TUBA CITY — Members of Tuba City’s Community Action for Children and Youth (CACY) stressed that the 16th annual Stars in the Desert was a huge success despite the windy weather. Special guests and other visitors were welcomed to town by Tuba City’s horrible sand storm, but the weather did not damper the weekend’s festivities.

CACY accepts nominations from local area schools for students who have excelled or had high achievements in, but not limited to academics, the arts, athletics and community service. Each student is publicly recognized and receives a star engraved with their names as a commemoration of their achievements.

The purpose of Stars in the Desert, which has been held every year since the late 1980s, is to promote community involvement in honoring local youth. The event gives area youth a chance to interact and meet Native American celebrities or Native American supporters.

The CACY sponsored event is a weekend full of youth oriented activities that honor all youth. CACY invites celebrities and other role models to share in the celebration of our youth. The celebrities act as our special guest and the children are regarded as the ‘Stars In The Desert.’

This year’s event featured a star studded cast of Native American celebrities including Eddie Spears, Lakota Sioux, who starred in the recently released “Black Cloud,” as well as “Dream Keeper,” “The Slaughter Rule,” “Geronimo,” “The Witness,” “Through the Window,” “Edge of America” and “The Ancient Warriors.” Accompanying Spears was his brother, Michael Spears, whose work includes roles in “Skins,” “Dances with Wolves,” “Lakota Woman,” with Irene Bedard, and “Through the Window.” Both Eddie and Michael are currently wrapping up their latest project titled, “Into the West,” which is scheduled for national release in June. “Into the West” is a TNT 12-hour mini-series and will premier on June 10 on the TNT network.

Other special guests included Blackhawk Walters, the World Kickboxing Champion turned movie actor, in the recently released “Shadow Hawk on Sacred Ground.” Blackhawk has a record of 42 wins and only 7 losses with 34 of those wins being knockouts.

The 16th annual Stars in the Desert was undoubtedly one of the most successful ever for the CACY Program. CACY members emphasized they would like to thank their sponsors, all committee members, board members and especially the numerous volunteers who worked long tiring hours to assure a memorable weekend.

CACY members also pointed out they would like to thank the community for its continuing support and encouragement. The planning for the 17th annual Stars in the Desert will begin immediately. If anyone or any group would like to volunteer, please call or e-mail our Program Director Vanessa Brown at 928-856-4057 (Vanessa.Brown@cacy-tubacity.org),; Joshua Lavar Butler at 206-260-6217 (Joshua.Butler@cacy-tubacity.org), or visit our website at www.cacy-tubacity.org for more information.

(Joshua Lavar Butler is the President/CEO of the CACY Program.)