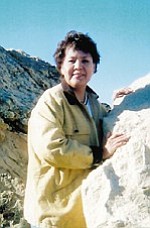 According to Sara Yazzie, it all started when administrators interrupted her law class to announce they were privileged to introduce the Student of the Year for Crownpoint Institute of Technology and then called out her name.

"I was shocked and excited, but it got even better when they said I would also receive a Coca Cola scholarship in the amount of $5,000," she said.

Also student senate president at CIT, Sara soon found herself among other tribal college honorees at a special reception and banquet at the American Indian Consortium of Higher Education (AIHEC) conference held April 1-5 in Albuquerque, N.M.

"I spoke at the banquet before hundreds of people which was a special privilege for me," she said, "and I will also speak at the CIT graduation next month."

Yazzie, 50, is studying for an AA degree in the Law Advocate program with intention of completing her classes by December 2005. Her career goal is to become a Navajo Nation judge. She credits her enrollment at CIT to Jerry Manuelito, CIT recruiter, for his persistent recruiting.

"I decided to go into this degree program because of life changing situations I've endured in my life," Yazzie said. "I was the victim of domestic abuse."

She shared that she fled her home to escape violence and ended up working in a women's shelter. "But then, I actually taught classes to male abusers who were court mandated to participate," she said. "I am an advocate for stronger domestic abuse laws in the Navajo Nation because I see too may cases of abuse happening amongst Navajo families."

She said she hopes to gain a stronger voice in the effort to more effectively deal with family violence by studying law and becoming a judge.

Yazzie who grew up in Leupp, is a single parent to three grown children, two sons and a daughter, and grandmother to 6 grandsons.

"It took me three years to overcome the trauma of abuse before I decided to advance myself through education so it helped that my children were all independent by then," she said.

Since the Fall 2004, Yazzie has resided on campus.

"My dorm room is really different from everyone else's. I make it my home away from home," she said. "I quilt, sing, play guitar, run and read my bible in my spare time. I'm five hours away from home, so I visit only once per month."

When she first came to the Crownpoint Institute of Technology, she said her only intent was to get an AA degree and maybe a job.

"But that changed when Jasper Joe, former CIT residential staff, practically begged me to run for student senate secretary," Yazzie said. "I thought being secretary would be okay so I took on the office, but then I was promoted to vice-president to fill in for someone else, and then the president left, so I became the president.

"I open the student senate office every morning because I want the students to see that we want to work with them."

She went on to list various upcoming activities the senate has scheduled, a basketball tournament, an ice cream social, an honors banquet.

"We try to schedule events every weekend, too."

About her instructors in the Law Advocate program, Yazzie said, "Joe Hibbard practices law and Judge Carey is a judge, so they bring practical experience to the classes and they really motivate us. Mr. Hibbard is very challenging. He expects us to retrieve cases and write up briefs because he knows what will be required of us on the job."

While she is a serious student and a student leader, Yazzie laughed when she recalled, "I've actually been asked out to student dances a time or two but I always refuse and tell them I'm old enough to be their mother at 50!"

Perhaps the result of her daily two-mile runs, Yazzie does appear much younger than her age but then perhaps that's also because she is happily pursuing her education and career goals.

"I was raised with Christian teachings but I see the traditional Navajo teachings as complementary to what I was raised with," she said. "You can balance the Dine philosophy of education with Christianity so I think it's great that CIT offers classes for this. I think it's important for students to learn the Navajo language. How else will be keep our identity? Even in the field of law, there is consideration of traditional Navajo law, too."

Summing up her sense of appreciation for all that she was experiencing, Yazzie said, "I wrote letters to every one of my instructors at CIT when I was named Student of the Year and Coca-Cola scholar because it took all of them to help me earn these honors." She added, "My kids are so proud of me, too, and they see a big difference in me."

Yazzie closed with a question.

"Life is a dance. You learn as you go, and how else will you know you can do something until you take the first step to do it?" she asked.