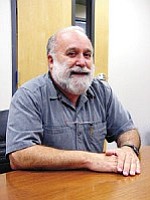 S.J. Wilson/Observer ASDOH Dean Dr. Jack Dillenberg recently received the Citizen of the Year award from the Mesa Baseline Rotary Club in recognition of his own commitment to community service.

MESA -- The Arizona School of Dentistry and Oral Health (ASDOH) in east Mesa is the first and only dental school located in Arizona. In its inaugural year, beginning July 21, 2003, 54 students were selected from over 1,200 applicants.

They are now beginning their third year of the program, and according to ASDOH Dean, Dr. Jack Dillenberg, all are doing exceptionally well.

"It's not often you get to create something from scratch," said Dillenberg, who has been with ASDOH since its inception.

It was challenges such as this that brought Dillenberg to Arizona--originally to serve as the Director of the Arizona Department of Health. Under Governor Fife Symington, Dillenberg penned the infamous "tobacco--tumor causing, teeth staining, smelly puking habit" slogan.

The native New Yorker acknowledged that it takes a great deal of effort to establish a dental school. Dillenberg's vision of what makes a great dental school includes a challenge to his students to be active in service to their communities--and to increase the number of dentists available to typically underserved communities such as reservations.

To that end, Dillenberg and Associate Dean, George Bluespruce--the very first Native American dentist--have committed themselves to active recruitment of Native American students from across the nation, encouraging them to actually spend time on service learning projects in Indian Country.

"We hope to keep increasing the number," Bluespruce said. "My role is to increase the number of American Indian students in the profession of dentistry."

Bluespruce reported that there are only 95 Native American dentists in the country, but in order for Native American communities to have parity with non-native populations, there would need to be more than 1,000 he said.

Bluespruce, who serves as the president of the Society of American Indian dentists, goes the extra mile for his Native American students, providing mentorship as well as assistance in matters such as financial resources. He speaks of his students with a great deal of pride.

"All are doing very well. I am proud of them--they are interested in returning to serve their Indian communities," Bluespruce said. "I appreciate very much their confidence in me, and their willingness to come to me for any kind of support. I enjoy very much the camaraderie we have."

Bluespruce became a dentist out of horrible memories he holds of having a tooth extracted on a reservation--without anesthesia. He said he believed that Native Americans deserved better treatment, and wondered why no tribal members served as dentists.

His mother and father were both supportive of his decision to become a dentist, and when he graduated with his Doctor of Dentistry Degree in 1956 from Creighton University, he asked his mother and father to stand up to receive his eternal gratitude.

Bluespruce's other passion is tennis, and he became the only male Native American player to be honored in the Hall of Fame in 1996. He was the Native American Indian Champion in 1977, and in 1984, he took the State of Arizona Senior Olympic Tennis Championship. He continues to play in the over-70 age division.

"I'd like to say I know their families, and how very proud their families are of them" Bluespruce said. "Dentistry is a long and trying education. It takes special people to make that commitment and succeed. This makes me all the more proud that these four are doing so well."

Dillenberg said he fully expects that ASDOH graduates will become leaders in their communities, actively involved in community service. The school focuses on providing compassionate, competent dentists to underserved communities, and part of the educational process features service education coordinating student partnerships with communities of need.

To that effect, fourth-year students will be sent out to communities including those on reservations for alternating four week periods. While in the community, the students will benefit from actual service under mentorship with doctors of dentistry and other community service providers. Upon returning to ASDOH for another four weeks of classroom experience, students will be able to process experiences in the field.

ASDOH students have already visited IHS facilities on the Navajo, Hopi and Apache reservations to demonstrate the need for dental care there provided in a culturally sensitive manner. Having Native American students along guaranteed a better understanding of that need.

On Jan. 28, 2004, the Judge Ruskin Lines Dental Techniques Laboratory was dedicated and named in honor of Judge Ruskin Lines (1918-99) was born in Pima, and served as a resident F.B.I. agent, serving the Indian community. Following his F.B.I. career, Lines served as Graham County Attorney, going on to become a Superior Court Judge of Graham County for 30 years. Lines' three sons all became dental specialists and maintain a dental practice in Tempe, while also serving in Mea, Safford and Silver City, N.M.

The 42,500 square-foot dental clinic, housing 80 chairs, was dedicated at the groundbreaking ceremony held April 23, 2004. Services are provided primarily by third and fourth year students under the supervision of doctors of dentistry, according to Peter Vardalos, who serves as the director of public relations for ASDOH.

ASDOH's dental education program is accredited by the Commission on Dental Accreditation, a specialized accrediting body recognized by the US Department of Education.