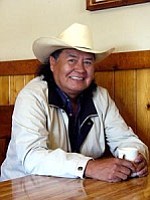 S.J. Wilson/Observer Razor Saltboy, 'The Rhymemaker,' takes a break on the road at Mary's Cafe in Flagstaff. Not a coffee drinker, he dreams about cold orange juice and Navajo girls.

FLAGSTAFF -- Razor Saltboy's "One Last Ride" is a spirited romp across the vast Navajo Reservation. This CD is all about love, life alone and far-flung travels. Listening to Razor's songs calls to mind historical accounts of Navajo people riding across Dinetah on horseback, singing as they traveled along.

Largely biographical, "One Last Ride" features Razor's description of journeys across Arizona, New Mexico and Utah in the 12 songs recorded on his latest offering.

"Some of these songs may be personal, but I still stand back and write objectively," Razor said. "I rely on my life experiences to convey the messages in my song, but I still don't open my soul to everybody."

"Driving down the road in my truck, my baby at my side," Razor's first line on the CD invites the listener along on a cheerful cruise with the radio on a country station.

"I find the highway's a good way to get over being blue," he sings, and admits that he is ready for the ride.

If Razor's music is taken at face value, it is an admission that romance can take a hopeful Navajo man from Crystal, N.M., to Monument Valley, Indian Wells, Chinle, even Tuba City "on every bad road and highway."

But the journey is worth it, according to the song "Navajo Girls."

"Navajo girls they know everything about love. They don't worry about the Man in the Moon or the stars above. You burn up like wood when they make you feel so good. All the women in the world don't compare to Navajo girls."

But the reservation can also be a lonely world too. There are songs that talk about a young man's pining for a beautiful woman he spots at a dance, another where a man remembers a powwow dancer from his past.

There are songs of tragedy, of suicide and women who have lost hope--Razor, as the Rhymemaker, sings accounts of several of them.

There has also been time alone, and of being used. "I'm Not Your Holiday Inn" was written during one of those times.

"I tried so hard to give you the best of my love, but you said that my heart was just not enough. You wanted much more than I could give."

This song was inspired by different situations, and describes a woman who only comes around when she wants a good time. But the man in this song has finally gathered his pride and made a stand.

"Woman, I don't have your reservation, there's no vacancy in this heart of mineÉI'm not Your Holiday Inn."

The title song "One Last Ride" describes an aging cowboy sitting back, alone, contemplating past rides. The song ends with "He's out on the trail on his last ride."

Another song was written in Razor's truck returning from an outing with friends to his home in Crystal. "

Razor Saltboy is more than a musician--he is poet and playwright as well. It is in this latter role that popular Navajo comedian Ernie Tsosie III is most familiar with Razor.

"I worked with Razor, and his sons on a couple of his scripts," Tsosie wrote in an e-mail on June 4. "We produced 'Juniper, Sage, & Sandstone,' which was an awesome period piece. The production was done under Pine Land Theater, which consisted of Razor and his sons. We put on full-blown plays, actually held auditions, found actors and rehearsed the entire play, something that hasn't been done since in the Window Rock area to my knowledge."

Tsosie describes Razor and his family as very motivated.

"Razor had written these plays and they made it happen. It is not easy to stage a play. It's very demanding and time consuming," Tsosie observed. "You have to put almost everything else in your life on the back burner and focus entirely on the play."

Tsosie recently produced his own play, and that experience found him putting his family, life and job on hold for almost two months. He is grateful for the experience he gained from working with Razor and Pine Land Theater.

"It was a great experience for me personally to be a part of those days," Tsosie said. "I love the theater and I love acting, and to do it on the Navajo Nation for the Navajo people made it that much more special.

"Razor Saltboy, is a very talented Native American performer in this thing we call show biz, one of few who are out there making things happen and on more than one stage," Tsosie continued. Razor is someone I would like to see much more of--especially when it comes to his scripts."

Despite some of the failed romances hinted at, Razor has not lost his belief in love.

"As a singer, songwriter, entertainer and actor in plays and films, I've learned that you can't help but fall in and out of love."

Razor said that joining with son Hondo's band "Revolver" was one of the smartest moves he has made musically. This is the first CD produced solely by Razor. Hondo served as music director--the CD was recorded Pineland Records, Razor's own registered label. Razor is proud of this latest offering.

Now, a mature Razor looks back over his life--at his music, romance, and being alone.

"I try not to think too much about it, but on long, lonely nights, I think it's amazing that a young boy raised by alcoholic parents, and who didn't start school until after the age of 8 could accomplish so much in his life."

Look for Razor's CDs "Call Me Your Baby," "The Warrior's Pride," and his latest offering "One Last Ride" at Vann's Trading Post in Tuba City, Navajo Arts and Crafts in Cameron, Chinle and Window Rock, and at Ellis Tanner Shopping Center in Gallup, N.M.

Razor and Revolver are now working on their summer tour schedule and will appear at Farmington, N.M. on June 26, at Shiprock Dine College Music Festival on July 9, at Laughlin, Nev. on Aug. 4. To book Razor Saltboy and Revolver, call 928-729-2854.