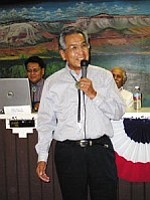 Photo by Karen Francis Peter MacDonald congratulates the community of Cornfields at its chapter house after the Transportation and Community Development Committee certified its community-based land use plan. (Behind MacDonald are TCDC members Willie Tracey and David Rico).

Many Navajo leaders were present as Cornfields, Klagetoh and Forest Lake received certification for their community-based land use plans during special Transportation and Community Development Committee meetings on June 14.

This was the first time that the committee certified three chapters' land use plans in one day.

The Cornfields land use plan was the first certified. The Transportation and Community Development Committee meeting began at 9 a.m. at the Cornfields Chapter House, south of Ganado. Council delegates Orlanda Smith-Hodge and Omer Begay (Cornfields/Greasewood Springs/Klagetoh/Wide Ruins) co-sponsored Legislation No 0419-05 to certify the Cornfields land use plan. Willie Begay (Chilchinbeto/Kayenta) made the motion to consider the legislation and Johnny Naize (Tselani-Cottonwood/Nazlini) was the seconding party.

Cornfields consultant Sandy Weir said that the community-based land use planning committee is well-prepared to carry out plans for the community. "They are at the point where the certification day is like a graduation day," Weir said.

Weir said that a high percentage of community members participated through opinion surveys, including people who don't currently live in the Chapter but are registered voters. Weir said that surveys were also taken to Ganado High School to solicit input from the youth.

Weir said that the community also worked with many entities in developing the plan, including Navajo Tribal Utilities Authority, El Paso Natural Gas Company, and the Navajo Fish and Wildlife Department.

Cornfields CLUP Committee member Elizabeth Johnson said that the first concern of the community, as addressed through the Community Vision and Assessment section of the plan, is ensuring that community members have running water and electricity.

The second concern is creation of jobs and the third concern is making affordable housing available to the community. The committee voted 6 in favor and none opposed to certify the Cornfields community-based land use plan with one amendment.

Following the certification, the committee members were escorted by officers from the Apache County Sheriff's Office to Klagetoh Chapter to certify the land use plans for that chapter and for Forest Lake Chapter.

Following the certifications, Speaker Morgan commended the communities for completing their plans and particularly for involving the youth. He also encouraged the chapters to attain governance certification.

"We are seeing more and more chapters move on planning for their communities," Speaker Morgan noted. "It takes a lot of hard work and community participation, but we are seeing that the chapters have the capabilities and the desire to move forward. Gaining governance certification can help make that happen," he added.

"This was the first time that we have seen a youth involved in developing the community-based land use plan," committee Chairperson Mark Maryboy (Red Mesa/ Aneth/Mexican Water) said referring to Evander Leonard, a 16-year-old Ganado High School student who served on the CLUP committee for Klagetoh Chapter.

Leonard said he was selected to serve on the CLUP committee when he attended a chapter meeting. He said that the committee would meet after school hours to accommodate his schedule. Leonard is a senior at Ganado High School.

Edward Jim (Grey Hills/Sheepsprings/Newcomb) said that the involvement of young people was encouraging. "Our college students want to come home. They want to have homes and good things," Jim said.

"There are a lot of young people who have vision. They want to live in their community," MacDonald said.

He also commended the Transpor-tation and Community Development Committee members and Speaker Morgan for their movement to help empower the local communities.

Community-based land use plans for Huerfano Chapter and for Navajo Mountain Chapter are next to be considered for certification by the Transportation and Community Development Committee.

(Karen Francis is Public Information Officer for the Navajo Nation Office of the Speaker.)