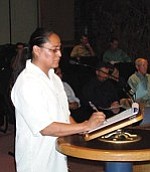 FLAGSTAFF -- With 70 cents of every dollar going off the Navajo Reservation, Navajo officials worry about the future impact if the local Navajo economy continues on its current path towards devastation. Some Navajo Nation officials would rather address this issue, rather then to sit back and wait for the derailment to persist.

The Navajo Nation Department of Economic Development and the Navajo Nation Regional Business Development (RBDO) departments presented a combined presentation to the monthly joint-meeting between the Coconino County Board of Supervisors and the City of Flagstaff, which was held downtown at City Hall on June 13.

Shorty first construed the complexity in operations of the Navajo Nation's Department of Economic Development to the County Board of Supervisors and the Flagstaff City Council members before beginning his presentation about the casino project.

Shorty stated that a business consultant is currently concluding the process of an economic feasibility study. The purpose of this study is to identify casino sites on the Navajo Nation in New Mexico and Arizona.

He said the tribe hopes that by the end of this week, results of the feasibility study will be completed and available for review. Based on the study's recommendations, the Navajo Nation will look at each of the sites and begin phase two, which consists of analyzing each and creating a prioritized list based on the results of the completed report.

In Arizona, the Navajo Nation is allowed four sites and is allowed 2,400 slots, which is divided into 600 slots per site. The Arizona sites that are seriously being considered include Page, Cameron, and two other sites along I-40 that have already expressed their interest in being considered in the feasibility study and these reservation communities include Leupp, Houck and Lupton Chapters.

In New Mexico, the Navajo Nation is not limited to the number of casino sites and as a result, several sites are currently being studied and considered in New Mexico. The New Mexico sites include Shiprock, Manuelito, Nahata Dziil and Hogback Chapters. These sites received approval to continue the process of establishing casinos, which was passed last year during the Navajo Nation Council's Summer Session in July by a vote of 59-14.

The tribe is also in the process of hiring the Executive Director of the Navajo Nation Gaming Regulatory Office. Shorty said that Navajo Nation President, Joe Shirley, completed job interviews a couple of weeks ago and that he should be making a selection soon. This position will need to be confirmed by the Navajo Nation Council in July during the Council's Summer Session.

"As far as the operation of the casinos, the gaming enterprise will regulate that revenue generating sector of the Navajo Nation," Shorty said. "Currently, unemployment is at an all time high at 50 percent. With this in mind, local chapters have expressed their interest in possibly building a casino. Leupp Chapter happens to be one Navajo Nation Chapter that is seeking this business venture."

Shorty pointed out that the Economic Development Department has been working with these chapters to get input from local community members and local land users.

"Economic Development has also met with several State Agencies in order to establish a working relationship," he said. "These agencies include the State Land Department and the Arizona Department of Transportation."

The Economic Development office is currently working on a timeline of one year and hopes to see the casino development begin within this timeframe. Shorty said that President Shirley hoping to fast-tracking some of these sites.

Shorty concluded by stating that he and the Navajo Nation are excited about the casino project and he looks forward to establishing a good working relationship with the City of Flagstaff and the Coconino County Board of Supervisors.

The site on I-40, near the Twin Arrows exit between Flagstaff and Winslow, should have a huge economic impact on Flagstaff.

Shorty briefly added that the various locations will be selected carefully based on the feasibility study and the project readiness. There is also a possibility that two projects may be launched at simultaneous times.

The feasibility study's final step is to seek approval from the Navajo Nation President as well as the Navajo Nation Council. In addition, the casino project needs to seek approval and support from the local chapters as well as approval from the local land users. Since the proposed casino sites are situated on Navajo trust land, the casino project needs to gather signatures from the current land users who hold the grazing permit rights to the proposed sites.

"The Navajo Nation Regional Business Development has done a good job with this casino project thus far," said Louise Yellowman, Coconino County Supervisor for District 5. "There are no jobs on the reservation, or rather a limited number of jobs that are immediately available, and often times I hear people say that there's no jobs here..."