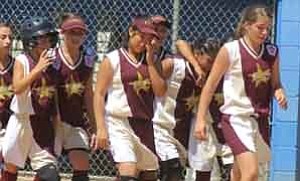 <i>Photo by Jeff Pope</i> <b>The Winslow 11-12-year-old girls1 All-Stars couldn1t hide their disappointment at losing to Peoria in the championship game on July 22.</b>

The Peoria Sidewinders defeated Winslow, 3-0, to win the Arizona State 11-12-year-old girls' Little League Championship in Winslow on Friday. Peoria advanced to the regional round in Vancouver, Wash.

The game was a pitcher's duel between Karissa Haleman of Peoria and Mallory Smith of Winslow. Haleman shut out Winslow on just two hits. She did not walk a batter and fanned three. Smith was nearly as good, giving up just three runs, none of which were earned, on four hits and a walk. She fanned six batters.

Haleman had an excellent defense behind her, especially shortstop Chelsea Schofield and third baseman Jordan Houle who handled seven chances flawlessly between them and turned in several spectacular plays.

All of the scoring took place in the bottom of the third inning when Katie Angel singled and Ashley Soos reached on an error. A fielder's choice loaded the bases with no outs. The next two batters ground into force plays at the plate setting the stage for the one big hit of the game. Schofield lined a triple over the centerfielder's head to clear the bases and give Peoria a 3-0 lead.

Winslow mounted its only threat of the game in its final at bat. Felicia Gonzales singled and two outs later Gabby Stacey singled. A force out at third ended the rally and the game.

Gonzales and Stacey earned the only hits for Winslow.

Peoria handed Winslow its only two losses in the tournament. Peoria finished 6-0.

The Winslow girls earned a berth in the Championship Game by defeating Tanque Verde 8-5 in a semi-final game on Thursday. The Peoria Sidewinders won, 16-2, over Arcadia in the other semi-final contest on Friday.

Ivorie Cochran was a star for Winslow in the circle and at the plate. She worked the complete six inning contest, giving up only one earned run on just one hit. She walked five batters and struck out 15, leaving just three outs to be recorded otherwise.

Cochran was also two-for-three at the plate with a triple and three runs batted in.

Winslow grabbed a 1-0 lead in the bottom of the first when Arianna Huerta walked and scored on Cochran's triple.

The victors increased their margin to 2-0 in the bottom of the second when Melissa Jacobs walked and scored on a single by Robina Villanueva. Felicia Gonzales also had a single in the inning that moved Jacobs into scoring position.

The lead grew to 4-0 in the bottom of the third on a single by Alex Lomeli, followed by a walk to Jacobs, an RBI single by Sabrina DeValera and an RBI groundout by Jessica Pipkins.

Tanque Verde got on the board in the top of the fourth without benefit of a hit. Erica Heredia walked and both she and Lara Baker scored on a pair of Winslow errors on the same play. Baker hit a sharp ground ball on which both the shortstop and the leftfielder made errors. The scores cut the Winslow lead to 4-2.

Winslow plated four runs for an 8-2 lead in the bottom of the fourth. Huerta reached on an error, Gabby Stacey walked and both scored on a single by Cochran, who scored on the second Tanque Verde error of the frame. Mallory Smith singled and eventually scored on a wild pitch.

Tanque Verde completed the scoring in the top of the fifth when they plated three runs to cut the Winslow advantage to 8-5. Taylor Riesgo reached on an error, Shanna Comeaux and Morgan Trent walked. Riesgo scored on a wild pitch and the other two runners scored on a two RBI single by Baker, the only hit recorded off Cochran.

DeValera and Gonzales were one-for-two. Smith, Lomeli and Villanueva were all one-for-three with Villanueva having a RBI.