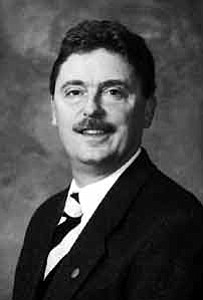 On June 7, Capt. James M. Galloway, M.D. was awarded the 2005 Clinical Physician of the Year from the Surgeon General's Physician's Professional Advisory Committee for his remarkable dedication and innovation in improving the delivery of cardiovascular care to Native Americans, to include work in national health initiatives, such as the American College of Cardiology -- American Diabetes Association "Make The Link" Program.

Dr. Galloway is a captain in the U.S. Public Health Service and the Indian Health Service. As Director of the National Native American Cardiology Program, Dr. Galloway provides oversight and cardiac care to Native Americans in Arizona, Nevada, Utah, as well as parts of California and New Mexico. He is the senior cardiologist nationally for the Indian Health Service and provides leadership, dedication and vision towards the delivery of the highest quality health care at the primary care and subspecialty levels, with his major focus area within the realms of primordial, primary, and secondary prevention.

Dr. Galloway entered the IHS in 1985 and served as an internist at the Keams Canyon Hospital on the Hopi Indian Reservation. He then served as the Clinical Director at the Whiteriver PHS Hospital on the White Mountain Apache Indian Reservation and then as a special assistant to the Phoenix area Director at San Carlos PHS Hospital. Subsequently, Dr. Galloway performed a cardiology fellowship at the University of Arizona College of Medicine where he continues with dual appointments as an Associate Professor of Clinical Medicine and Associate Professor of Public Health in the College of Public Health.

Dr. Galloway initiated and successfully developed a collaborative cardiovascular program in the Southwest, focused on improving the health and healthcare of American Indians and Alaska Natives in 1992. The program has been extremely successful in improving the quality of cardiovascular care as well as clinical outcomes and cost savings.

Over the past several years, Dr. Galloway has opened a branch of the Native American Cardiology Program in Flagstaff to provide higher quality and more accessible care to the large numbers of American Indians in the northern part of the state.

Dr. Galloway is board certified in both Internal Medicine and Cardiology and is a fellow of the American College of Physicians and the American College of Cardiology. Dr. Galloway is a respected teacher and lecturer with a dual focus: the prevention of cardiovascular disease and its risk factors as well as heart disease among American Indians and Alaska Natives. Dr. Galloway has published multiple articles, abstracts and book chapters and one book entitled the "Primary Care of Native American Patients: Diagnosis, Therapy and Epidemiology."

He has received numerous awards, including "Outstanding Clinician for the Indian Health Service" nationally in 1997 and the Secretary of Health and Human Services Award for Distinguished Service from Secretary Shalala in 2000 and again in 2004 from Secretary Thompson.

He was also awarded the prestigious Arizona Healthcare and Hospital Association's 2001 Salsbury Award for his dedication, leadership and outstanding contributions to the health of the people of Arizona. He has been awarded several Public Health Service medals, including the Commendation Medal and has received two cherished awards from American Indian Tribes he has served.

Significantly, Dr. Galloway has been selected by his peers as one of the "Best Doctors in America," an honor given to only the top 4 percent of subspecialists nationwide. Dr. Galloway was recently selected by U.S. Surgeon General Carmona to represent the United States Public Health Service as the Governor for the American College of Cardiology and was also selected by Arizona Governor Napolitano to be a member of the Arizona Governor's Council on Health, Physical Fitness and Sports.

Over the past several years, Dr. Galloway has worked with the American College of Cardiology in its efforts with the American Diabetes Association in the "Make The Link" Program, an educational and public health approach focusing on the link between diabetes and heart disease. For this work, Dr. Galloway accepted the national American Diabetes Association's 2003 C. Everett Koop Award for Health Promotion and Awareness on behalf of the American College of Cardiology.