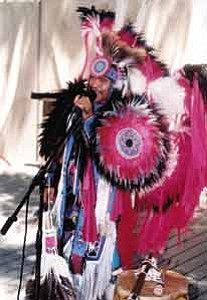 Stan Bindell/Observer <BR><BR> Allenroy Paguin, at the Prescott Indian Art Market July 9 and 10, demonstrated fancy dancing and played the flute. He also had his jewelry on display.

PRESCOTT -- L. Bruce Hodgins almost didn't enter the competition, but he was glad he did participate in the eighth annual Sharlott Hall Indian Market because he won second place in the jewelry division.

"I was surprised that I won an award. I wasn't going to enter," he said.

Hodgins said he didn't think about it until his wife Rita encouraged him to enter the show. He learned silversmithing from Sidney Secakuku Jr.

Hodgins uses his Navajo heritage and his Hopi upbringing in his work.

Born in Flagstaff, he was raised on the Hopi Reservation. He graduated from Winslow High School before earning a degree in biology from Northern Arizona University.

Keedah won the People's Award and First Place and Second Place in the Two-Dimensional Painting Division; Smith was the featured poster artist. Paquin didn't win any awards but performed his fancy powwow dance, played the flute and displayed his jewelry.

Fernando Benally won Best of Show for his jewelry.

The other award winners were:

Keedah, a Navajo from Steamboat, said winning the awards motivates him and makes him happy. His oil paintings make others happy as one art lover told him that his first place painting "made the hair on my back stand up."

That art lover is not alone as Keedah has won awards at the Gallup Intertribal Ceremonial and the Navajo Nation Fair. He has also won awards off the reservation such as Best of Class at the Wyoming Indian art market.

His paintings have also been purchased by New Mexico Gov. Bill Richardson and U.S. Rep. Jim Kolbe. He has a painting of Miss Navajo hanging in Navajo Nation President Joe Shirley's office. He donated a painting for the Window Rock veterans and has several murals on the reservation.

"I'm self-taught. I started right after high school," he recalls.

But Keedah worked 30 years as a welder before giving that up four years ago so he could focus on his artwork full time.

He graduated from Indian High School at Brigham City, Utah, and the Institute of American Indian Art.

His wife Coleen helps him promote his art.

Ryan Huna Smith was this year's featured artist meaning that his painting "the View From My Booth" was selected for the 2005 souvenir T-shirt.

"I was flattered that I was selected as the featured artist," he said. "This is the only show I enter every year because artists are treated very well here."

Smith, who is Navajo/Chemehuevi, used humor in this painting as it shows consumers wearing baseball caps and straw hats.

Smith paints with acrylics as his work resembles famed

But Smith also has other interests.

"My work is influenced by my interest in popular culture, specifically comic books and Japanese animation. These influences are incorporated in my work through the use of bold color, and exaggerated use of the human figures. I enjoy using the human figure as the main subject matter in my work. Using the figure gives me the opportunity to incorporate hands, which I feel are one of the most expressive elements an artist can use," he said.

His work has appeared in comic books such as Tribal Force #1.

Smith was born in Parker and raised in Needles. He graduated from Needles High School before attending the Institute of American Indian Arts where he earned a certificate in two dimensional art and then his BA in fine arts at the University of Arizona.

Smith is a program manager for the Upward Bound Program at Pima Community College. He also teaches art there.

He resides in Tucson with his wife Tamara and their three children.

Paquin is a competition powwow dancer and attends this show each year because he feels it's a good intimate show where the crowd and the artists can mingle.

"You can call me Chief Rice Krispie's because in the morning when I wake up I snap, crackle and pop," he said.

Born and raised in Albuquerque, he graduated from Valley High School in Albuquerque before attending the University of New Mexico and earning an associates of science degree in engineering and technology from Eastern New Mexico.

Paquin was a civil designer before deciding he wanted to use his art talents as his full-time job. He was so successful that he has been able to raise two sons on his artwork.

An Oklahoma woman taught him the fancy dance and a Hopi taught him to play the flute. His father Joe was a jeweler, but it wasn't until after his father died and his mother gave him his tools that he learned the jewelry side.

Bahe Whitethorne Sr. remains one of the best-known painters throughout Navajoland, but he also dabbles in bronzes. His art is mostly spontaneous and a reflection of his Navajo culture. He is self-taught and most of his art shows his life experiences. He also works in abstracts.

Whitethorne's paintings are usually acrylics or watercolors, but occasionally he will work in oils.

Born and raised in Shonto, Whitethorne graduated from Tuba City High School. He majored in art at Grand Canyon College and NAU.

He has four brothers and four sisters. Each is an artist in some way as the family talents include pottery, weaving and jewelry. His mother, Alice, is a renowned weaver.

Whitethorne's paintings can be viewed at Seattle Grimed Gallery in Winslow or Old Towne Gallery in Flagstaff.

Keith Smith is a Navajo painter who teaches beginning drawing at DinZ College in Tuba City.

Smith paints acrylics, watercolors and oils, mixing bright colors with soft earthtones. His paintings can take about 10 days, but sell for a minimum of $900. He usually paints traditional Navajos.

Smith was awarded with a Southwest Indian Arts Fellowship about three years ago.

Born in Tuba City, he graduated from Tuba City High School before earning a BFA from Northern Arizona University.

Art runs in his family as his mother, Mary Ann Begay, is known for her weaving. He said his wife Kalen and family give him inspiration for his artwork.

E.J. Satala, who is Hopi, Tewa and Yavapai, uses humor and guitar strumming to entertain as emcee.

Satala is known for his comedy as much as his music.

He wears different hats for each of his Native American, Mexican, cowboy, hillbilly and blues skits.

He sings in the Navajo, Yavapai and Iroquois languages as well as English.

Satala said he picked up his humor from his father Ferris P. Satala who was the clown in Hopi ceremonies because of his humor.

Satala had a career in electronics and served as the director of Carson Indian Center in southern California before retiring. But Satala continues to work for Elderhostel.

Satala said he likes the Sharlot Hall show because there is a variety of tribes and artists.

Born in Keams Canyon, he was raised in Polacca and graduated from St. Michael's High School. He attended St. Joseph's College in Indiana and Western States College before going into the Marines.

For more information, about the Indian art show or Sharlot Hall Museum, telephone 928-445-3122.