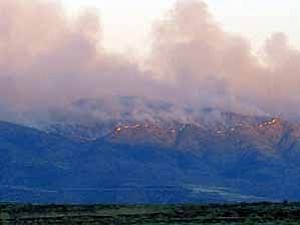 Firefighters battling the Arizona wildfires that have charred more than 175,000 acres as of Friday aren't going to receive the seasonal help from Mother Nature as soon as was hoped.

Science Officer Mike Staudenmaier at the National Weather Service in Flagstaff said persistent low pressure systems over the state are preventing monsoon winds from bringing badly needed moisture up from the Pacific Ocean and Gulf of California.

"The pattern we're in right now is one that would delay the onset of the monsoon," he said. "We really want to get a high pressure system established over the Four Corners region. That's what establishes the monsoon circulation. This yearŠwe've been having persistent troughs of low pressure moving across Arizona giving us this cool spring and windy conditions in late June, which we normally don't have.

"Also the fact that we have these persistent areas of low pressure moving across the state as opposed to high pressure which brings light winds, we're going to end up having slightly stronger winds than normal and that's going to also create periods of high fire risk."

The monsoon ‹ any wind that reverses its direction seasonally ‹ often brings significantly more moisture and shower and thunderstorm activity to the region. As the monsoon ends and the winds shift again, the reverse occurs, with much drier air returning.

For most of the year, winds descend on the southwest region from the west to northwest. During the summer, winds turn to a more south to southeast direction. Monsoons are based on thunderstorm activity, which is too random to predict.

As moisture moves over the higher mountains and the Mogollon Rim, a combination of uplift from the mountains and daytime heating from the sun causes thunderstorms to develop.

When storms brought by monsoons do come, Staudenmaier said the season could be drier than normal because of the late start. However, he added that the Little Colorado River Valley could still flood depending on the intensity of the unpredictable thunderstorms.

"If it starts later, you're going to need a more intense (storm) to get caught up," he said.

The monsoon season generally begins in early July and extends through the middle of September. Winslow usually receives about one-third of annual precipitation in July and August.

Smoke from the Cave Creek complex fires north of Phoenix has reached as far east as Albuquerque. A meteorologist there said that part of the haze could also be from fires in Utah.

The Arizona blaze, which began June 21 as two lightning-started fires began near Cave Creek just north of Phoenix, also may have killed the world's largest saguaro cactus, which could be two centuries old.

A spokeswoman for the Tonto National Forest said she was not optimistic about the survival of the 46-foot Grand One, recognized in the National Register of Big Trees for its height, mass of limbs and a base circumference of nearly 8 feet.