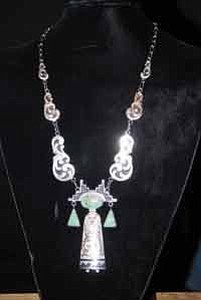 Julius Keyonnie, Navajo jeweler from Winslow, is an annual prize winner at Santa FeÕs Indian Market in New Mexico. This necklace, made from 18K gold and pure silver, won a prize at the 2005 market.

TUBA CITY -- Now in its sixth successful year of bringing a major winter, indoor art market to the Rez at Tuba City High School's Warrior Pavilion, the Native American Fine Art Show and Sale opened on Friday, Feb. 16. What followed was two days of art that featured a real gallery opening night with live music, tasty reception food and, most importantly, bona fide artwork that highlights the best of Native American art, both contemporary and traditional, all the while raising funds for Toys for Tots.

It's the Tuba City event of the season for being seen either buying art, browsing or just flat out enjoying the crowd of artists and their amazing works.

This art event raises money through its raffle and toy drive. Art buyers were busy shopping, collecting art and trying all the wonderful hors d'oeuvres from the local Bashas' Dine Supermarket staff who donates generously to help co-sponsor an event that will benefit Hopi, Navajo and San Juan Paiute children.

Sculptures, paintings, Hopi traditional and contemporary carvings, pottery, jewelry featuring both silver and gold, weavings and many other types of native contemporary art forms were the featured "performers" at this sale.

Participating artists paid 50 bucks to enter this annual art show, but also had to bring a brand new toy for the children's toy drive and create a special one-of-a-kind Christmas tree art ornament that would be auctioned off by the evening's end to more than 40 lucky winners.

Last year, there were 27 artists. This year, the new list included 13 more artists, bringing the total to 40.

It is a good time to meet an artist of choice in person, get a chance to visit with him or her personally, find out firsthand how the art is created and, if need be, special order something directly from the craftsman for a personal collection.

One of this year's new artists who traveled all the way from Santa Clara Pueblo, was Michelle Tsosie Sisneros. She is also a writer and illustrator of children's books.

Sisneros, who grew up on the Navajo reservation, eventually married into her New Mexico tribal roots of Santa Clara, where she shares a home with her husband and son.

Sisneros began painting when she was a child and later, that talent developed into a full-time painting career. She said she looks forward to participating again.

Student work was also featured this year, in a booth designated just for young up and coming artists. This youth artistic encouragement goes back to native traditional roots and intergenerational efforts to help young ones explore and learn about beauty through their own hands and thought.