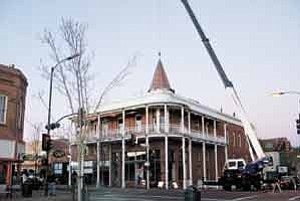 FLAGSTAFF -- The Weatherford Hotel's newly restored cupola will be the backdrop for this year's annual Pine Cone Drop. For the sixth straight year, residents and visitors will fill the streets of downtown Flagstaff to ring in the New Year with the lowering of the six-foot-tall, 70-pound, lighted pine cone.

"Flagstaff has truly embraced this event as mountain town tradition," said Weatherford Hotel co-owner Sam Green. "It is such a joy to see hundreds of people pour into the downtown for this family celebration on New Year's Eve."

As has been the tradition, there will be two pine cone drops on Dec. 31. One at 10 p.m., to coincide with the lowering of the giant ball in New York's Times Square. Another drop will be at Arizona's midnight.

Meantime, across the street in Heritage Square, the Flagstaff Downtown Business Alliance will be hosting its annual New Year's Eve party from 8 p.m. to midnight with music and dancing. Both events are free.

Marking 30 years of restoration, Weatherford Hotel owners replaced the ornamental cupola, or witches hat, that once graced the historic Victorian building on Nov. 19.

The crowning decorative feature atop the hotel was destroyed by fire, along with the building's wrap-around balconies, in 1929. Recreating the triangular-shaped cupola is one more step in restoration efforts by Weatherford Hotel owners Henry Taylor and Sam Green.

"It seems appropriate to be celebrating our 30th year with the hotel with such a visible symbol of Flagstaff's history," said Taylor. "Restoring the cupola is definitely a milestone in our quest to return the historic building to its original grandeur."

The 14-foot cupola donning a five-foot spire is copper plated and designed to withstand 90-mile-an-hour winds. The copper covering will eventually turn a turquoise green color with exposure to the elements. The structure, about the size of a ski boat, was trucked from Campbellsville, Ky., and hoisted to the top of the Weatherford by crane. Currently, strings of lights mark the memory of the cupola on the hotel.

Local architect Tim Whiteside of Johnson Walzer Associates designed the cupola. "It's been really enjoyable to work with a piece of Flagstaff's history and seeing it reconstructed," said Whiteside. "The owners have a good photo record of what the original looked like, but we didn't have a record for how it was built."

"This is practically a lifetime commitment that Henry and Sam have taken on and their efforts have restored pride to the downtown area making it a more attractive and vital place."

It is great that the corner turret of the Weatherford will have its missing conical roof restored," he said. "This will give an even greater historic feeling to this important building."

Weatherford owners say the next phase in the massive restoration effort will be the completion of the balconies to wrap around three sides of the building, currently they adorn two sides. Transforming the basement into a game room and pub is also in the works.