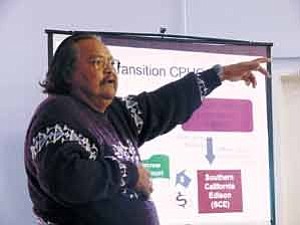 S.J. Wilson/Observer Tuba City Chapter President Frank Bilagody outlines some of the points made by elders from his community.

TUBA CITY -- The first in a series of meetings by the Just Transition Coalition (JTC) was held at Tonaneesdizi Chapter House on Dec. 20, where a first of its kind petition was introduced to the community.

Members of the coalition spent a whole day describing what the Just Transition Petition is and how it might seek restitution for Navajo and Hopi communities that have been profoundly affected by the mining activities at Black Mesa.

According to Roger Clark, director of the Grand Canyon Trust's Air and Energy Program, the Just Transition Petition is a way to mitigate the closure of the Mohave Generating Station--scheduled for Dec. 31.

The petition will be filed with the California Public Utility Commission (CPUC) on behalf of approximately 18 chapters and 12 Hopi villages by the coalition that includes the Grand Canyon Trust, the Sierra Club, Black Mesa Trust, Indigenous Environmental Network, To' Nizhoni Ani and the Black Mesa Water Coalition.

The petition will ask the CPUC to divert monies Southern California Edison could receive through selling its sulfur dioxide allowances to other utilities under provisions in Title IV of the 1990 Clean Air Act.

"I don't think it's a good idea to reduce pollution here and increase pollution out east, but we have no control over the law," Clark said.

Tony Skrelunas, also with the Grand Canyon Trust, explained why the petition will be aimed solely at SCE--a publicly owned utility company governed by the CPUC.

The Mohave is owned by four entities--with SCE owning 56 percent interest. The other entities are the Salt River Project, Nevada Water and Power and Los Angeles Water and Power.

"When Mohave closes," Clark said, "it will reduce its sulfur emissions by over 40,000 tons per year."

Currently, he said, the price of sulfur dioxide emissions is $6 to $7 hundred per ton, which would yield a revenue stream of between $24 and $28 million per year. The petition, if approved, could mean up to a $35 million injection into Hopi and Navajo economies.

Southern California Edison would have the opportunity for equity investment in up to $350 million, Clark said.

Clark admitted that this proposal could only work if California ratepayers did not have to bear the financial burden, but that Californians would approve of the opportunity for cleaner energy.

Enai Begay of the Black Mesa Water Coalition spoke passionately about the need not only for renewable energy projects, but for restitution to be made to the Navajo and Hopi people.

Anson Arviso, a consultant with the coalition, stressed once more that the petition was an idea that had never been tried before.

"But there are good legal arguments behind the plan," Arviso said. "There is a need for justice for all the years that we have been the source of cheap water and coal to California, a source of cheap labor."

Arviso went on to describe what the coalition described as the Just Transition financial investment plan.

"Since water and coal royalties are divided between the Navajo and Hopi equally, we propose to split the money into two separate escrow accounts," Arviso said.

From these accounts, each tribe would divert 30 percent of the funding to tribal governments, 40 percent to renewable energy and sustainable development projects, 10 percent to job re-training for mine workers and 20 percent to applicable villages and chapters.

Arviso said that 75 percent of Black Mesa regional chapters and Hopi villages would need to approve the petition before the coalition took it to the councils of both tribes for adoption.

"This is a good venture," Skrelunas told community members before explaining key components of the proposal to community elders.

Leonard Selestewa, president of the Black Mesa Trust, told community members that the proposal was like cooking.

"We are cooking up an idea, hoping that it will bake. This has never been done before," Selestewa said. "We have sold our water for as little as $1.67 an acre foot. All along our people got pennies for our coal and our water. This is where all of us need to say to SCE, 'you've benefited for 30 something years.' We need to come together to tell them to do the right thing, to give us [these funds.] We deserve it."

After a lunch provided by To' Nizhoni Ani, community members rose to speak their minds, primarily in Navajo.*

The statements were summarized on paper charts by Vanessa Van Dever.

Max Goldtooth supported the idea of renewable energy for the sake of Navajo and Hopi children, and said that it was good that the coalition was seeking to win the sulfur dioxide allowance money.

"If we don't try, the money will go back to Southern California Edison," Goldtooth said. "If we created more commercial development on the reservation, we would get sales tax dollars. We need more reservation schools because children are suffering as they live in dormitories off the reservation."

Thomas Cody, president of Leupp Chapter and Jonathan Nez, Vice President of Shonto Chapter, each pointed out that the proposal would have to be approved by 88 chapter delegates of 110 chapters.

Nez said that he would like to see a portion of this money diverted into education.

Nez also referred to an executive session meeting headed by President Joe Shirley Jr. on the subject of the mines.

"We must also work with the Hopi," Nez continued. "We don't want to step on any toes."

Cody, who also serves as the vice president of the Western Agency Council, asked Clark what authorization the coalition had to file the petition on the behalf of the Navajo and Hopi people.

"Window Rock could easily write a letter saying that you don't have the authority to file the petition," Cody said. "I would also like to know which of the chapters would benefit from this petition.

Goldtooth and Cody both told coalition members that they felt the proposed 50/50 division with the Hopi Tribe would not work, and that a formula for division would need to be developed before chapter support for the proposal could be won.

"The way we can become one with the Hopi is through renewable energy," Goldtooth said. "We need to learn from our past--and the Navajo Hopi Land Dispute. We are going to have to be one when it comes to this. If we are going to support you, changes will have to be made to the proposal."

Dennis Parker, who was once a mine worker, cautioned JTC members to remember that the Navajo/Hopi Land Dispute still affects relationships between the two communities today. Though he thanked coalition members for hosting the discussion, he said that there were many issues confronting energy development, including land right-of-ways, water consumption and capital for startup.

Kee Jefferson, an elderly man, also brought up the land dispute and approached the proposal from a traditional outlook.

"The Navajo oral history does not acknowledge Hopi land or resources," Jefferson said according to a translator. "It is important to go back to the Creation Stories, to utilize the knowledge of the elderly."

Jefferson wondered aloud whose interest the JTC will represent--the Navajo or the Hopi.

Laura Chee also expressed her displeasure over test drilling she said the Hopi Tribe conducted against her wishes. Still, she said she was willing to support the plan.

"I think this is a good plan, but I think the training of mine workers should be the responsibility of Peabody Coal Company."

This suggestion was met with approval by most of the remaining citizens.

Andy Bessler of the Sierra Club thanked everyone for attending the meeting, and encouraged individuals to assist in coming up with a plan.

Nez urged members of the JTC to phrase language within the petition in favorable language and expressed his concern that stereotyping of Native Americans by Californians as wealthy casino owners might hurt the effort.

Clark reassured Nez that Californians were generally educated about the Navajo and Hopi and how these two tribes have been grossly underpaid for their resources.

As the meeting came to an end, elder Marie Martin stood to express a change in her earlier attitude.

"I believe we can work with the Hopi on this. I believe we should try. Our children need this money for education. We deserve this."

*The quotes by the remaining speakers were paraphrased through the assistance of a first language Navajo speaker.