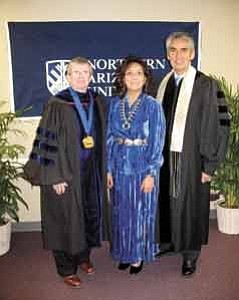 "Northern Arizona Univer-sity recognizes his highest attainment of professional achievement by bestowing upon him an honorary doctoral degree," President Haeger said, noting that President Shirley was beginning his 38th year of public service.

Next, Liz Grobsmith, provost and vice president for academic affairs, and Regent Ernest Calder—n placed the blue and gold hood over President Shirley's head and President Haeger presented him with his degree. President Shirley also wore a white satin sash from the Native American students of NAU.

In his remarks, President Shirley said receiving the honorary degree was significant to him and his wife, First Lady Vikki Shirley, an NAU graduate, because their late daughter, Tona Vee Shirley-Paymella, was a 1997 NAU graduate. She was working on her Master1s degree at NAU when she was killed by a drunk driver two days after Thanksgiving Day 2001.

The President, who holds a master's degree in social work from Arizona State University, told the graduates that a degree from a university can mean independence and standing on one's own feet.

"If one is independent, one can look any man or woman in the eye," he said. "One does not have to shy away from anyone or anything."

He said that with a college degree, the opportunity to help millions and make the world a better place was within their grasp.

He said having knowledge means living a fuller and more rewarding life, leading to more laughter and enjoyment.

"For me, I have found out that time does have wings," he said. "You need to stay focused and continue to accomplish. You already have only 492 months left before you retire from the workforce at age 65, and you have not even found a job yet."

Among the changes are the creation of the DinŽ Department of Education, a Navajo Nation Board of Education and the implementation of Navajo language, culture and history in the curricula on Navajo Nation schools.