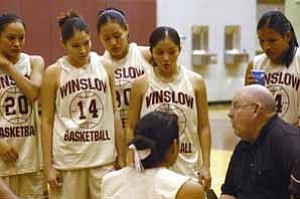 The Winslow Lady Bulldogs won their first two games and lost the next two in the Winslow Winter Classic on Thursday and Friday.

The tournament was won by Snowflake 75-73 vs. Monument Valley. Winslow finished the tournament with a season record of 7-4 and had one game left before the Christmas break, a Tuesday contest at Flagstaff.

The Lady Bulldogs opened tournament play with a convincing 71-54 victory over the Coconino Lady Panthers on Thursday.

Winslow built a 21-14 first period advantage, mostly on the outstanding play of freshman Samantha Sam who scored all of her 14 points in the period. The Lady Bulldogs had increased their margin to a commanding 45-24 by the intermission and 63-34 after three quarters. Coconino cut into the margin in the fourth quarter against Winslow reserves.

Arveda Yazzie shared game high scoring honors with Sam with 14 points each. Celeste Begay was also in double digits for Winslow with 10 points. Breanna Grignon, Deshara Washington and Justina Todacheenie with 13 points each were all in double figures for Coconino.

On Friday, the Lady Bulldogs won a thriller over the Pleasant Grove Lady Vikings from Utah 64-63 to advance to the semi-finals.

Pleasant Grove led 23-18 lead after the first period, but the Lady Bulldogs led by a single point 37-36 at the intermission and 51-50 after three periods. Winslow used a delay game in the final three minutes of the contest and escaped with the victory when the Lady Vikings seemed reluctant to foul.

Arveda Yazzie led all scorers with 22 points for Winslow. Samantha Sam with 12 points and Elisha Billie and Levyna Ben with 10 were also in double figures for the Lady Bulldogs. Ben missed all of the second and third quarter and half of the second after picking up her third foul.

Kailee May led Pleasant Grove with 14 points. Chelsea Yarn with 12 and Aimee Dorais were also in double digits for the Lady Vikings.

On Saturday, the Lady Bulldogs lost to Monument Valley 65-54 in a semi-final game.

In the third place game on Saturday evening, the Gilbert Highland Lady Hawks defeated Winslow 62-39 to claim that trophy. Pleasant Grove had won the consolation trophy earlier in the day.

Highlands built a 13-10 lead in the first period and steadily increased it during the contest. The Lady Hawks were up 32-23 at the intermission and 49-33 after three quarters.

Amanda Vennard led the Lady Hawks with 17 points. Morgan Wohltman with 15 points and Jessica Olson with 10 were also in double digits for the victors.