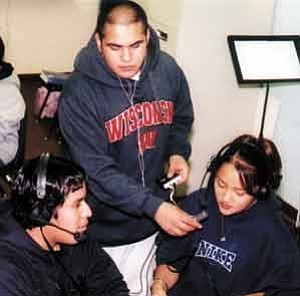 Walker Ami, a 17-year-old senior, said the students attended informative workshop about science, engineering and technology. He plans to major in pre-med in college

"We learned about colleges and job opportunities," he said.

Ami, who has belonged to AISES for three years, said everybody from NASA to Kodak was at the conference to talk to students. He said there were more college students than high school students at the AISES conference. He said the only other high school that he saw there from Arizona was Rough Rock High School.

"But there were students there from all over," he said. Arizona State University, University of Arizona and Northern Arizona University a had representatives there to talk to students. This was meaningful to Ami since he plans to attend college in state.

"I liked meeting people from all over and attending the college fair," he said.

Ami, an honor roll student, is the son of Lloyd Ami and Miriam Tahbo.

The AISES students raised half of the $4,000 that the trip cost. Hopi High School paid the other half.