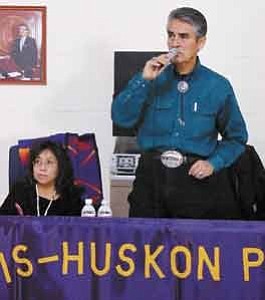 BIRDSPRINGS -- Close to 150 people came together on Dec. 10 to share entertainment, good food and holiday cheer in honor of Navajo Nation veterans. As part of the District Five Veterans Organization meeting, veterans traveled from Flagstaff, Ash Fork, Williams, Winslow, Tuba City, Chambers and Window Rock to make up close to half of the guest list.

In his invocation, the Rev. Joe Curley reminded all present of the sacrifices made by Navajo veterans.

"Many of these men still struggle with the side effects of services in foreign wars," Curley said.

Thomas Walker Jr., one of the chapter delegates for Birdsprings, Tolani Lake and Leupp, read the 2005 Proclamation naming 2005 the Year of the Navajo Veteran, signed June 10 of this year.

"I really appreciate the commitment and dedication to our veterans within this proclamation," Walker said.

As Christmas carols were offered by Whitehair, Largo, Curley, Andith Curley and Lorraine Noel, President Shirley and his wife arrived at the chapter house and were welcomed to join the dignitaries at the microphones.

"On behalf of the Navajo Nation, thank you," Shirley said to all veterans present. "I want to express my recognition and due respect on behalf of my people. To all veterans, it's because of you that we enjoy freedom and the Dine way of life. If not for you, I'm not exactly sure where we would be, or if we would have our way of life.

"Yes, often we forget who we are, we forget the reason we have freedom, my way of life," Shirley continued. "I want to thank you and all of your families, I want to thank all veterans and those on active duty and National Guard."

Shirley spoke of those individuals who were wounded in the service of this country.

"I don't think we can ever pay them back for giving us freedom. It comes at a great cost," Shirley said. "There is a war going on in Iraq and Afghanistan, and to date 2,100 soldiers have died across the ocean to protect our freedom. Can we pay them back for this freedom? This freedom came at great cost. It came with a price. This is why we must always be cognizant of those who died. We cannot forget the veterans. We cannot forget their families."

Shirley continued by providing an update on several issues relevant to the Navajo Nation, including possible casino revenues that might assist Navajo Nation veterans.

Finally he recognized the Code Talkers, Akee and Willie, and Emma Jean Willie for the loss of her son.

"To all Code Talkers, all members of all branches of the armed forces and all of the veterans, thank you," Shirley concluded. "I wish them all Merry Christmas."

Walker thanked the president for the positive working relationship his chapter enjoyed with Navajo Nation leaders, including Shirley.

"In the spirit of k'e and of Christmas, make yourselves at home and take advantage of the wonderful hospitality of the Birdsprings Chapter," Walker told the president.

The Warrior's Medal of Valor, designed by Tall Eagle, a Native American from the state of Washington, is the first medal ever minted for the Native American Nations to honor all military personnel, active duty, reservist, National Guard and veterans. It is presented to veterans and active duty personnel at various Native American events, regardless of the recipient's cultural background.

Afterwards, Phelps delivered a greeting and message from Renzi, and then singers joined by Pastor Eddie John and Tom Baldwin of Birdsprings resumed. After some singing, Baldwin and John added Christmas messages of hope and good cheer.

Walker thanked the Birdsprings chapter and community for their hospitality.

"The chapter went of its way to make sure people were accommodated, and that no one was left out," Nez said. "Everyone was recognized, and everyone enjoyed a good meal and treats to take home. We personally invited the president, and are appreciative of the positive relationship we have with him."

As people relaxed and finished up the large dinner provided, Vicki Shirley made her way around the room giving out small wrapped gifts to the children in the crowd. She then joined her husband at the back of the room and the couple personally handed out a gift to each person before taking their leave.

Outside, the Native American Vietnam Veterans group passed out packages of grapefruit as children chased each other through the parking lot, clutching plastic bags full of Christmas candy. Elders, family members and friends chatted with the uniformed veterans who surrounded the chapter house. The Christmas season, it was clear, had arrived in Birdsprings--and the veterans who had been the guests of honor expressed their gratitude through their smiles and good wishes.