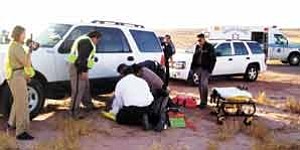 TUBA CITY -- Each year, especially since the major 9-11 disaster in New York, Tuba City community has been aware of potential public disaster.

As a result local emergency services agencies have made huge strides in assessing, restructuring and proactive planning for just about any type of disaster, natural or man-made that could affect the Tuba City areas and its surrounding communities, including the Hopi villages of Upper and Lower Mungapi.

Shirley Peaches, safety officer for the Tuba City Regional Health Care Corporation along with Reggie Curry, housing foreman for Tuba City Unified School District, have their students, patients and community members at the top of the safety priority list.

Their joint coordination efforts with the TCRHCC in conjunction with the Tuba City/Mungapi Community Response Team that have made Tuba City and surrounding areas a better place to live, work and be safe.

Their tireless efforts along with personnel at several agencies in Tuba City made the Dec. 1, mock disaster drill a success.

Their tireless efforts along with their support team personnel at several agencies in Tuba City made the recent Dec. 1, mock disaster drill a complete success.

This year, the mock drill, which is a multiple TC agency, community-wide preparedness drill, set up the scenario that a tornado coming up through Moencopi-Kerley Valley ripped through TC Primary School, then the entire TC District.

A drill this size requires tremendous preparation and Safety Officer Peaches, spared no efforts in getting her TC participating agencies to planning meetings by countless e-mails, phone calls and personal visits to get observations, evaluations and critical services in shape in the event that such a disaster did occur in Tuba City.

Tommy Atha, the NAIS Bio-Terrorism & Emergency Response coordinator was a principal player in coordinating with the play-by-play scenario, complimented by audio assistance and overall communication coordination with the Navajo Police Department from the NAIHS Mobile Incident Command Unit.

"Mr. Atha really did a wonderful job in helping us to coordinate this drill and making it a safety priority preparedness learning experience for each agency in Tuba City that was involved," said Peaches. "I think the drill overall went extremely well thanks to all the participation of the local Tuba City agencies that provide emergency services, like the Navajo Nation Police Department, the Navajo Nation Emergency Medical Services, the Navajo Nation Fire and Rescue and the Navajo Nation Rangers, Dine' Association, TCUSD and the TCRHCC employees including several local community volunteers who served as 'victims' of the mock disaster. I think that one of the most notable details of this Dec. 1 drill, is that each of our Tuba City agencies took this mock exercise as serious and conducted themselves professionally, efficiently and kept the students and community members safety as the priority. "

One major improvement since last year's mock drill which was a bio-hazard spill near a busload of out of the country tourists at the corner of Highways 160 and 264, where communications has significantly improved.

The TCRHCC has recently obtained a new repeater and hand held radios to improve radio communications with both NNEMS and the TCRHCC Emergency Department. The hospital also plans to obtain additional radios in order to achieve greater inter-operability.

Future table top drills will be conducted by this interagency CERT team to enhance the Tuba City community response to disasters.

This year's drill was a CODE GREY, which is a weather related emergency. Though the school district does not currently have a CODE Grey in its emergency chart system, TCUSD did have each school site practice with its staff members and administrators, safety preparedness in the event that students must be evacuated into safe areas.

Staff members at TCUSD, according to weather related disaster safety, did practice entering closed hallway areas, away from windows, closing doors to prevent flying glass from hitting students if this disaster had been real.

Both Curry and Peaches monitored the drill in order to bring information to the final drill assessment meeting held immediately after the drill was complete.

Safety Office Peaches was also a featured guest on TCUSD's Education and Community Channel 7, discussing the upcoming drill and gave audio examples of what the Community Alarm Code would sound like through the horn system in Tuba City to keep the local community aware of the public drill.