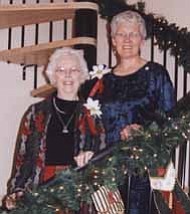 This year, the sites branched into outlying areas, and were as well attended as the ones in the center of town.  There was a noticable relaxed cammaradie among the attendees, who often shared features from sites already visited with guests coming in the door.  'Wait till you see....." was overheard at each location. Outstanding features at each location included:

From Ted and Susan Carpenter's, a snowman tree topped with son Cameron's magic hat, a village with each piece having a family significance, and 'Moose' the turtle.  Other favorites were the northwest influenced bathroom, and Ted's impressive wildlife mounts.

From the Robert and Roberta Cox home, a Victorian-inspired decor complete with elegant costumes donned by Mrs. Cox and daughter, Nikki Steward.  As well, the grounds spoke of elegance with a gazebo, victorian lighting, fountain and pond.

From Ray and Cristina Weber's, not only an enormous display of collectible toys, but the memories of uses the site had seen over the years before it became a residence.  "I remember when...." prefaced many comments.

From the Loren and Jean Sadler site, guests were treated inside and out to a lovely display of traditional Christmas decorations.  From the miniture lighted trees flanking the front sidewalk, to the large village display in the front window, the image of an old fashioned Christmas came to life here.  As a bonus, one of the hostesses was Morlie Fales, the lady credited with starting this tour 20 years ago.

The Old Trails Museum had several unique offerings as well.  The front display window was filled with antique toys and such,  and there were two new doll displays on loan with Winslow roots.  In addition to the WWC hostesses, the museum had staff present to answer technical questions, and topped that off with a Harvey Girl in uniform, that being Peggy Nelson.  Just to prove once again how the old can be new.

The WWC thanks each and every person involved with the tour this year, from the host sites, to the workers, to the attendees.  Net proceeds from this event will go toward sending a local high school sophomore to the Hugh O'Brian Youth Leadership Seminar held annually in June on the Arizona State University campus.  HOBY was established in 1958 after O'Brian spent weeks in Africa with the great humanitarian Albert Schweitzer.  The program is in each state, several foreign countries, and has been lauded by dozens of corporate and international leaders.