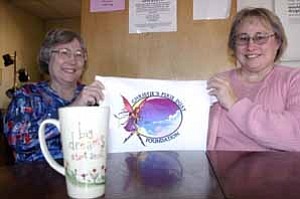 For almost one full year Alice's Place has been under the guidance of Oscar House.

The organization is pretty much in the same position, though, seeking a building and/or land to build a shelter on.

In January 2005, after several years of struggling to open shelters, an unexpected windfall gave the mission, along with Agape House and Winslow Guidance Associates, a second wind.

In October 2004, Ursula "Pixie" Baker and Christine McCoy won the $11.3 million "The Pick" jackpot. With the lump sum, the sisters netted about $6.5 million before taxes.

The pair operate the outpatient treatment center called Winslow Guidance Associates, with Baker as the only full-time counselor and McCoy as the business manager.

With the money they won, they created the Christie's Pixie Dust Foundation. The endowment will fund the WGA, Alice's Place and Agape House.

The organizations' goal is to fight the three-headed monster of domestic abuse, substance addiction and homelessness.

The latter two operations fall under the umbrella of WGA but are supported by a small network of churches and community leaders. It's because of a lack of overwhelming community support in Winslow that has prevented Alice's Place, a shelter for domestic violence victims, and Agape House, a shelter for street people, from being fully operational.

Now that they have the match money for state and federal grants, the next hurdle is finding a location near, but not in, town to run the three organizations. House has been heading up that responsibility.

House has put his 30 years of working for the Navajo Nation to use in finding ways to work with the tribe, as well as the Hopi tribal leadership.

Discussions to buy Hopi lands have fallen through, and the group is working to find other possible shelter sites.

House noted that once they have land or a building for the shelter, the group can go after several grants.

Carolyne Muchmore has been the case manager since December. So far, she said she has only seen women and about half had children with them.

Muchmore is working on a project to open a thrift store in the downtown area that would benefit the groups.

The groups always accept donations, but specifically need basics, such as clothing and bedding, and toiletries.

Several groups help with fund raising and donations, including the Department of Corrections Winslow Complex and the APS Cholla Power Plant, along with several women's groups in Winslow and Wal-Mart.

When the groups do get the two shelters up and running, they will need beds along with linens.