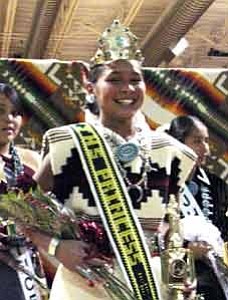 A native of Tuba City, daughter of Laverna and Darryl Shorty, a member of the Navajo Nation from the Tobacco Clan born for Tzil Ta'h Kiyaani Clan, Shorty is an eighth grader at Tuba City Junior High School.

She competed in both a contemporary talent and native traditional knowledge event which also highlighted current academic promise and on-going model student behavior.

Shorty performed a short ballet number for her contemporary talent and spoke fluently in the Navajo language about her traditional Navajo rug dress, describing from head to toe detail about her "womanly" clothing all the while exhibiting grace and confidence.

This year's new princess competed against three other junior high contestants, and has much "princess experience" under belt, which showed throughout the evening's competition.

While Shorty publicly thanked and attributed her Navajo language to her parents and sisters, she also deeply acknowledged her teachers at TC District starting in formative years at Tuba City Primary through the Navajo Language programs offered through the K-12 curriculum.