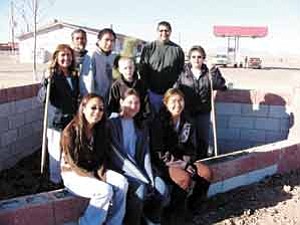 Willie has spent a little over three and a half weeks on the project, leading workers and volunteers in the effort.

On Nov. 30, Willie had the assistance of five students involved in an Arizona Department of Education Learn and Serve service learning effort at the STAR School. He has also had students from Little Singer Community School stop in to volunteer, and is inviting other schools and youth organizations to lend a hand.

"Thomas Cody [the Leupp Chapter president] initiated the effort," Willie said. "He approached me and asked me to design the landscaping project and to coordinate the resources available in the community."

There have been many contributions, including electricity, water, a backhoe, generators and more.

"I see this as a visible communication to the community, to let people become aware of what can be done, and what this area looked like in the past," Willie said. "There was a lot of beauty here, but we failed to carry it forward in the present times. We began accepting what was supposedly given to us, and our lifestyles changed.

"People here lived sustainable lives, and were concerned with the health of the environment and themselves. As this changed, I think about what we have portrayed for the children," Willie said. "Our physical surroundings have portrayed a lack of self esteem, allowing negative ways of thinking."

Willie hopes that as more children become involved in the project, they will begin to see what is possible to improve their community, and to understand the symbiotic aspects of the project.

Thomas Cody said he felt it was important to address the need to improve Leupp's physical appearance.

Cody, too, understands how the project can improve the selfesteem not only of the youth, but the community at large.

As Cody talked, he gestured to rows of condemned houses on the Leupp Schools Inc. campus, which have stood empty for years. Time has taken advantage of the situation--most of the windows have been broken out, there are holes in roofs, and doors no longer hide the decay inside.

The landscaping effort is not the only beautification effort taking place. Cody pointed out that the Community Center has finally had a necessary sewer removal, and the area outside will also benefit from Willie's landscaping knowledge. All possible trees and bushes that can be removed from the Leupp Schools Inc. campus will be replanted at the center prior to the construction of the new school. The Chapter House has also been renovated, including new ceiling fans and grass seeding.

"Funding for these projects comes from Navajo Nation sales tax dollars," Cody said. "Our biggest contributor here is that little store, which is why people should think about the benefits to the community of shopping there."

Cody added his thanks and recognition for the efforts of Lorraine Noline, Leonard Chee and Rosita Kelly towards the efforts.

Pricilla Half, who serves on the Leupp Schools Inc. governing board, said that it is nice to see something different for the Leupp community.

"This was needed, it makes Leupp look better," Half said. "It's nice to see the new landscaping. We've taken a huge initiative and I'd like to see more improvement in Leupp."

Clara Tsosie, the Community Services Coordinator for Leupp Chapter, has also helped in the effort.

"I really like the improvements," Tsosie said. "It takes a lot of planning and money, but before, when kids got off the busses to go school, all they saw was blowing dust. The new administration is doing a good job, and people are working as a team."

As work continued, various community members stopped by to express their admiration and thanks. Roberta Franklin, a frequent fixture at the "Leupp mall" across the street, stopped to give each worker a complimentary breakfast burrito to show her gratitude.

"I want to give credit to Justin. I drove through the other night and the trees were lit up," Franklin said. "They were beautiful. Justin has done a decent job, but we need a little more work."

Gesturing to the potholed, rough parking area between Pic-n-Run and the building housing commodities, Franklin said that she would like to see resurfacing of the areas on both sides of the highway.

Cody said that community improvement remains a goal for the future. He looked to the Leupp Public School, where topsoil was being unloaded.

This question has led to the delivery of the topsoil, which will hopefully support grass next year.

"The chapter is also announcing a Christmas lighting contest for all residents," Cody said. "We will award $100 to the residents of the house that wins. We will send out judges and make the announcement on Dec. 23."

Cody laughed that cash award would cover the electrical expenses of the winner.

Individuals who would like to lend a hand are welcome to join Willie and other Leupp residents mornings and weekends.