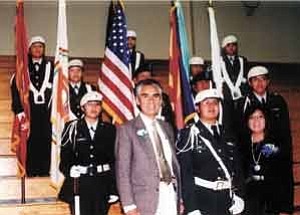 POLACCA -- Ryan Carl, a cadet with the Hopi High School Junior ROTC color guard, said it felt good to be part of the inaugural ceremony.

Carl, a 14-year-old freshman, said it was the first time he attended an inaugural.

"I liked the inaugural. It was a new experience. I think it was good to have the inaugural here to let the kids see the chairman and hear him talk about the issues. I liked what he had to say about education and the youth," he said.

Carl said Chairman Sidney did a good job of discussing the problems on the Hopi Reservation and offering solutions.

While Carl liked Chairman Sidney's speech, he said parts of the inaugural were boring because it went on too long.

"That was cool," Carl said.

Carl usually carries the American flag as his duties with the color guard, but two veterans joined the Hopi Junior ROTC in posting the colors so they gave that duty to one of the veterans. Carl carried a rifle instead.

"I liked carrying the rifle, but I prefer carrying the flag. The American flag is the highest flag you can carry and I have a lot of pride in it," he said.

Carl said the Junior ROTC cadets performed well at the inaugural, but could have done better. He said a few of the cadets were out of step. He said one cadet had a problem when one of the flags was stuck in the holder.

Carl said he was a bit nervous performing in front of the large crowd that was estimated at more than 2,000.

His grandmother, Phyllis Nahsonhoya, was in the crowd and told him he did a good job.

"She said I looked nice, and it was good that you did that for the chairman," he said.

Carl said being part of the inaugural ceremony is just one of the reasons he likes being in Junior ROTC.

"We get to join color guard or the Raider team or whatever unit we want. We also get to travel a lot and it helps cadets become better people," he said.

Carl said he has become a better person since joining Junior ROTC. Now, he said, he listens to his mother when she tells him to clean his room.

"Now, I listen to other people and do what they ask," he said.

Carl, an Honor Roll student, played football in junior high and hopes to play basketball for Hopi High. He plans to go into the Army or go to college after high school.