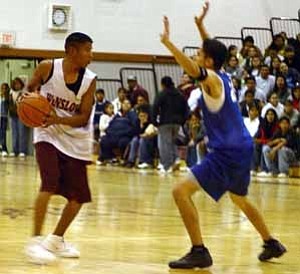 The Winslow Bulldogs Basketball team defeated the Alchesay Falcons Nov. 29. It was the second win for the team in two outings.

The Winslow Bulldogs defeated the Alchesay Falcons 89-64 in a non-conference basketball game played in Winslow on Nov. 29. The win was Winslow's second in as many outings. The Falcons were a late replacement for Blue Ridge which cancelled the game originally scheduled.

Winslow jumped out to a double-digit lead in the first quarter, building a 24-14 advantage. The Bulldogs opened a larger gap in the second quarter and led 49-30 at the intermission. Alchesay cut into that margin in the third quarter, getting the lead to single digits before Winslow rallied to build the advantage back to 63-49 entering the final period. The Bulldogs continued to pull away in the final quarter.

Blaine Lupe led all scorers with 24 points for Alchesay. George Cosay was also in double figures for the Falcons with 14 points.