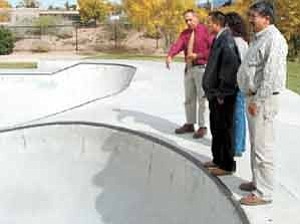 The Navajo Special Diabetes Project is looking into the possibility of funding a skate park in Window Rock or Fort Defiance areas if it can clear red tape and several hurdles of the political process.

Gloria West, senior project officer, Ivan Salabye, recreation specialist and Randall Comb, training manager, for the Navajo Special Diabetes Project learned the ins and outs of what a city recreation department goes through to meet the demands of the youth and its general population.

DuWayne Ord˜nez, section head and CEO of Fun for the City of Albuquerque, gave a tour to the visitors from the Navajo Nation. Ordonez talked about the city's effort to meet the needs of its population by taking kids on camping and fishing trips, bike rides and excursions with other kids from cities such as Phoenix, Denver, Los Angeles and other cities in the West.

The biggest hit for kids is the skate parks in the Northeast heights and in West Mesa area. The Los Altos Skate Park is filled with youth during the evenings and on weekends, according to Ord˜nez.

"Our school systems are different here to make it possible for kids to be here in the middle of the day," Ord˜nez said as some 20 kids were at the skate park in the middle of the morning. "We have worked extra hard to make this a safe place although there are some things that we could do differently now after our experiences. We would do away with the fence and keep the lights on in the evenings so we won't have kids trying to break in during the night.

Ord˜nez said that they have no problems with gang members although the skate park is located right next to the high concentration of gangs in northeast part of the city. He said that 95 percent of the youth are those who do not cause any trouble that are usually skating and using the facility. It is the other five per cent that make it bad for everyone else, according to Ord˜nez.

The representatives from the Navajo Special Diabetes Project learned what to do and what not to do as they visited with Ord˜nez and some of the students to came around to give their input about the skate park and the pools of cement that looked like the Bisti badlands near Burham, N.M.

"It would be great to build a facility like this for our youth," said Salabye. "There is such a need for these kinds of development where kids can utilize their skills and make use of their time."

Gloria West said that the Navajo youth really need a place where they can hone their skills rather than in front of shopping stores and public sidewalks.

"If there is a facility like a skate park, then parents will know where their kids are during times away from home while they are skating," West said.

Combs, West and Salabye will be touring the Phoenix recreational facilities on Dec. 1 and taking a look at what that city has done for its youth with park facilities.