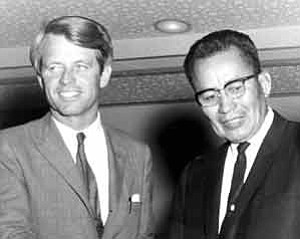 WINDOW ROCK -- The late Navajo Tribal Chairman Raymond Nakai, 86, who died Aug. 14 of pneumonia, is being remembered as the first modern Navajo leader, a champion of Navajo civil and religious rights, and the man who ushered in the first economic development initiative to the huge, remote Navajo Nation.

The Navajo Nation issued a proclamation urging "that all Navajo people mark this Day of Remembrance by pausing to reflect on the late Chairman Raymond Nakai's legacy and great accomplishments."

The proclamation notes that the late Chairman served the U.S. Navy and the Navajo Nation "with courage and honor during World War II."

It also notes that Chairman Nakai was the first modern Navajo leader who worked to promote civil and religious rights for Navajo people, and played a vital role in the establishment of Navajo Community College, the first tribally-controlled college in the United States.

"It is proper and appropriate that the Navajo Nation set aside a day of remembrance in memory of this remarkable man," the proclamation reads.

"The contribution Mr. Nakai has made has served to have the Navajo Nation rise to a different level of being and awareness," President Shirley continued. "With his leadership, our evolving nation has continued to grow. I know he has left the world we live in but his influences will long be remembered."

Speaker Morgan also issued a statement of condolence on the passing of former Chairman Nakai.

"We honor Mr. Nakai for his work as a leader," Speaker Morgan said.. "The spirit of leadership that he shared with the Navajo people will always be felt. As we work toward the betterment of our people and nation, we will always remember his effort, and the efforts of all our past leaders. Their influence will forever be present in the laws of our nation.

"I read a speech that Mr. Nakai delivered to the Governor's Interstate Indian Council in 1964," Speaker Morgan continued. "In it, he said, 'Getting together is a beginning, keeping together is progress, working together is success.' The greatest way we can honor his memory today is to pay heed to his words as we continue in our work to improve the conditions of our people.

"Mr. Nakai finished his speech by saying, 'When we may have occasion years from now to look back, may we all be able to say, 'I have done my part,' and may the very life and spirit of our Indian people then stand as testimony of our accomplishments.'"

"Mr. Nakai was one who could certainly have said that he had done his part," Speaker Morgan concluded.

Also on Aug. 17, Arizona Governor Janet Napolitano issued a proclamation to honor the memory of the late Chairman on behalf of the State of Arizona.

In Gov. Napolitano's declaration, she notes that Chairman Nakai was "a leader in higher education, civil rights and religious freedom, served his country in the United States Navy and the Navajo Nation as a Tribal Council Member and Chairman."

She said he worked tirelessly to strengthen the Native American Church and was an inspiring advocate of the Church.

"He will be remembered and revered as a wonderful man and a great leader who gave Navajos their first real bill of rights and as one of the first Native American leaders to bring media savvy to his office," the Governor said. "As one of the greatest bilingual speakers ever, he will be greatly missed but he leaves a rich legacy of contributions to the Navajo people and the people of Arizona."

"He's one of the backbones to Navajo economic development," said David Clark, President of AzeZ Bee Nahagha of the DinZ Nation and the first president of the Native American Church of Navajoland. "He advocated for the civil rights of the Navajo. He wanted to have a constitution established. That was his platform during the time he was campaigning."

Clark said he first got to know Chairman Nakai as a boy when Mr. Nakai returned from Navy service in the South Pacific and worked at the Navajo Army Depot in Bellemont, Ariz.

"My parents and many others, the elders, worked there," Clark said. "He was employed there with the Department of Defense. He was a prominent leader at the time."

Chairman Nakai was born in Lukachukai, Ariz., on Oct. 12, 1918. He served two terms as chairman of the Navajo Tribe, as it was known then, from 1964 until 1971. He went on to be a councilman on the Navajo Tribal Council from Lukachukai after leaving office as chairman.

"He had great skills in communication both in English and in Navajo because he worked for radio station KCLS in Flagstaff," said Peter Iverson, Arizona State University history professor and author of "The Navajo Nation." He had an appreciation for media. He served at a time of great transition and a time when important issues were being confronted."

Among those issues were education, Native American religious freedom and civil rights. In 1968, Chairman Nakai played a vital role in the establishment of Navajo Community College--today DinZ College--the first tribally-controlled college in the United States.

In 1967, Chairman Nakai met with Bureau of Indian Affairs officials to explain his goals to create the college. The officials expressed disbelief that the Navajo people planned to operate their own college.

Chairman Nakai is remembered for having said, "We're not asking for your permission. We're just telling you what we're going to do."

Chairman Nakai also presided over the Centennial of the Navajo Treaty of 1868, which freed 8,000 Navajos from captivity at Fort Sumner, N.M., known as the Navajo holocaust, and established a Navajo reservation.

One year later, in 1969, the Navajo Tribal Council passed a resolution to refer to the Navajo Tribe as the Navajo Nation. This was to remind Navajos and non-Navajo alike that, as a people, Navajos were distinct, Professor Iverson said.

States and we are apart from the United States," Professor Iverson said. "In the long run, Chairman Nakai is somebody, I think, who will be seen as a more significant leader. He was an important person, and important to recognize and remember."

Chairman Nakai is also known for firing the first general counsel for the Navajo Tribe, Norman Littel, who had tremendous influence in the working of the Navajo Tribal Council in the 1960s.

"Littel did not go gently into the night," Professor Iverson said. "They had a tremendous confrontation about that. And, in the end, Nakai's stance held."

Chairman Nakai is also remembered for having asserted the right of Navajo people to use the sacrament peyote, known in the Navajo language as azeZ, or medicine. In the 1960s, members of the Native American Church were being persecuted for their religious use of azeZ.

On Oct. 11, 1967, the use of peyote in religious ceremonies by Native American Church members was approved by the Navajo Tribal Council by a margin of three votes.

Chairman Nakai was preceded in death by his parents John and Bilthnedesbah, his sisters Mary C. Tso and Nellie Nakai, and his brothers Frank and Paul Nakai.

Services were held at Aug. 18, at St. Isabel Catholic Church in Lukachukai with Fr. Blaine Grein, OFM officiating. Burial was at the Lukachukai Community Cemetery, followed by a reception at Lukachukai Chapter House.

Rollie Mortuary of Gallup was in charge of arrangements.