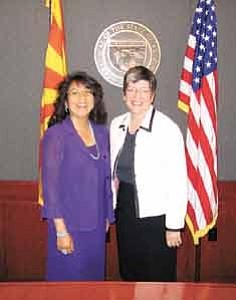 The 1994 VAWA is expected to expire Sept. 30 unless Congress reauthorizes it through passage of Senate Bill 1197 with its Tribal Title IX enhancements. The First Lady visited the Governor in her office here and was accompanied by Navajo Nation President Joe Shirley, Jr.

"Domestic violence is the number one crime on the Navajo Nation right now," said Vikki Shirley, who has been on the Governor1s Commission on Arizona State Domestic Violence since 2003 and has served on New Mexico Gov. Bill Richardson1s Advisory Board on Domestic Violence. 3A lot of people deny that it is out there, just like alcohol."

According to the U.S. Justice Department, one in three Native women will be raped and six in 10 will be physically assaulted in their lifetimes.

The Governor told Mrs. Shirley she would discuss the need to reauthorize VAWA with other state governors when she meets them this weekend.

"I've been a big supporter (of the law) and actually brought the first case in the country as U.S. attorney," the Governor said. "I will do what I can. Your timing is perfect."

Critical to reauthorization of the law are the enhancements that provide funding to Native shelters and programs to help women and children affected by domestic violence. The Tribal Title IX enhancements include provisions to ensure that all perpetrators of violent crimes against Native women are held accountable, increases research on violence against Native women, and establishes a national tribal sex offender registry.

At the same time, she hopes to see the federal law reauthorized because it provides a 10 percent set-aside for tribal programs.

"The set-aside means a lot to the shelters and programs on the Navajo Nation," Vikki Shirley said. It means an increase of funding and services to all providers, law enforcement, the judicial system, and, of course, the Navajo people who need this help."

"She's our Mother and a daughter to the Navajo people," the President said. "I don't think there's any doubt that she's going to support Navajo."