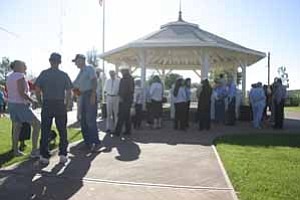 <i>Photo by Jeff Pope</i> <b>Approximately 100 people gathered at the gazebo on First Street and Kinsley on Friday to officially dedicate the Parkway, Phase I of the Renaissance on Route 66 project.

For decades, the thin strip of dirt between First Street and the rails was littered with broken bottles and garbage. It was vacant and useless real estate that nobody wanted. It was very much like the rest of downtown Winslow.

Six years ago, the City of Winslow in cooperation with residents and downtown business owners began work on a project to revitalize the area from First to Fourth Street. The goal of the "renaissance on Route 66" was to make the downtown area the center of activity, something it had not been in more than 20 years.

On Friday, nearly 100 city employees, residents and Arizona Department of Transportation Board members gathered at the corner of First and Kinsley to officially dedicate Phase I of the project.

"This is something we are proud of and will be proud of for years," Mayor Jim Boles said while standing at the center of the gazebo.

The three acre First Street Pathway connects the Hubbell Trading Post to City Hall and includes elements of Winslow's past and present.

The gazebo is one of those elements that symbolize what the area once meant to the city. Starting around 1900, the gazebo at First and Kinsley was the focal point of the town. It served as the gathering spot for community events, especially patriotic ones, according to local historian Janice Griffith. But sometime in the 1940s, as the "center of town" moved away from First Street, it was torn down.

So when it came time to plan the development of the Pathway, Griffith ‹ one of 14 members of a Joint Task Force ‹ pushed to have the gazebo rebuilt.

"Everyone had a different thing that was important to them (on the task force)," Griffith said. "I felt is was very appropriate to bring something back that we had lost."

The Pathway also includes the one-of-a-kind 30-foot wooden carving of an indian. The statue was moved from the old Visitor's Center to the end of Berry in January.

The train cars come from Belen, N.M., and were donated by the Atchison Topeka Santa Fe railroad.