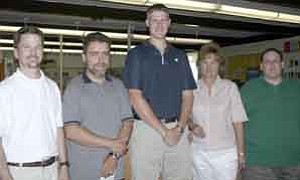 Eric "Ricky" Greer is definitely the new kid on the block. In his first professional teaching position, Greer will be teaching seventh grade science and eighth grade government.

He's also the seventh grade head football coach and will be an assistant coach for the high school basketball and baseball teams.

He said he's looking forward to returning to his roots.

"I'm excited to be home and glad to be a Bulldog. I also look forward to working with the youth of our community," he said.

Greer was born in Flagstaff but was raised in Winslow and is a member of the Class of 2000.

He said he was inspired by his mother and uncle, both teachers, to join the profession and would like to inspire his students to share his passion for science.

"I have always loved science and want to pass this love onto the youth of our community," he said. "It was exciting watching them experience life science and explore it further."

Erick Petranovich has some very big footsteps to follow in also. His father, Don, is well known in the school district for his years of dedication to teaching. He's also known throughout Arizona for his six state titles as coach of the girl's basketball team.

Erick said his father was part of the reason he chose to become a teacher. The other part is the reward he receives when he helps a student figure out a problem.

"It's just that look when you see the light go on when a kid finally understands something, especially in Special Education," he said.

He graduated from Winslow High School in 1990 and Northern Arizona University in 2000. He spent his first three years in the profession at Bonnie Brennan Elementary School and the last two and Kino Junior High in Mesa.

He said the most important aspect to teaching Special Education students is to not give up on so-called "problem students."

"I had this kid in Mesa who everybody said was not a good kid," he said. "One day he came up to me and said, 'it's only because of you that I stayed this long.' The following year he made the honor roll. They just need to know someone cares."

Encouragement and persistence, or what he calls "the glacier approach," is the best method to help students learn.

"You push them, then you back off," he said. "Some don't have the structure in their lives. When I worked with emotionally disturbed students in San Antonio, by week six it would dawn of them that what I gave them on Monday they could get by Friday. They got it in their heads that if I believed they could do it, they could do it."

Before becoming a teacher eight years ago, Shepard was a trainer in the U.S. Air Force. He said he moved a round a lot growing up. He received his degree in aeronautical engineering from San Jose State in 1988. He and his wife, Cheeri, have four children.

Dow Stephens said he's enjoying the small town camaraderie since moving to Winslow this summer. He previously taught at a middle school of 1,200 students in Salem, Oregon.

"I really enjoy the small close-knit community," he said. "The students are very positive and well-disciplined. I'm impressed with the organization and the way everyone works together here in Winslow."

Stephens is teaching seventh and eighth grade English. An avid reader, Stephens said he wants to share that dedication with his students.

"I've always loved to read and learn," he said.

He and his wife, Jennifer, were married this summer. Jennifer is pursuing post-graduate work at Northern Arizona University.