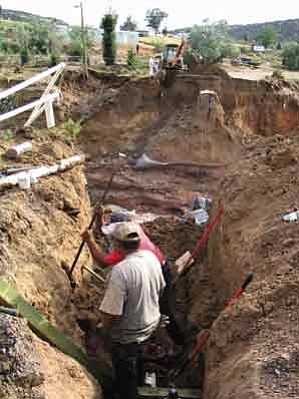 Photo by George Hardeen Workmen begin to repair a waterline that was torn out by a 28-foot-deep flash flood that tore down the Tse Bonito Wash on Aug. 11.

The emergency covers areas that have been affected by flash floods resulting from rainstorms that occurred on Aug. 11.

The most severely hit areas were along the Tse Bonito Wash just across the Arizona-New Mexico border next to the Navajo capital of Window Rock. Water in the wash rose to an estimated 28 feet Thursday evening, tearing out two bridges and stranding about 100 residents on the west side of the wash.

"This is an emergency," President Shirley said following a helicopter tour of the area Friday evening. "We don't want to lose anybody. It appears from above that everything is OK but we1re always mindful of our elders and children."

Patrick Sandoval, chief of staff for the Office of the President and Vice President, said the priority is the protection of life, limb and property.

He said the President has ordered a large supply of bottled water and chemical toilets be made available to the residents stranded by the downed bridges.

On the evening of Aug. 12, workmen began to repair a water line that was lost with the bridge crossing Tse Bonito Wash.

A bulldozer brought in to make a temporary road settled in the soft, wet soil and became stuck.

Johnny Johnson, head of the emergency management effort for the Navajo Nation, said storms moved into the area on Aug. 9, 10 and 11, dumping rain in the Western Navajo Agency, which caused flash flooding. That was followed with heavy rains in the Eastern and Central Navajo Agencies.

Flooding occurred in the Fort Defiance, Rio Puerco and St. Michaels housing areas, he said. Beside large washes filling to capacity, many smaller washes were over capacity, he said.

No deaths or injuries have been reported, Johnson said.

President Shirley said emergencies related to the flooding should be reported to his office and directed to Communications Director George Hardeen at 928-309-8532.