Alternative energy on the Rez explored at NAU summit 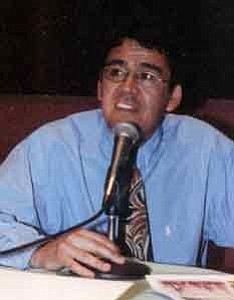 FLAGSTAFF -- The Navajo Nation has a cutting edge solar project underway and the Hopi Tribe could soon have a model windmill energy project.

Sandra Begay-Campbell, principal member of the technical staff at Sandia National Laboratories, hailed the Navajo Nation Solar Project as one of the best in Indian land.

Through a partnership of Navajo Tribal Utility Authority, Sandia Laboratories and the U.S. Department of Energy about 340 solar homes have been established on the Navajo Nation since 1993.

"There is just so much need for electrification on the Navajo Nation," she said. "This is just the start."

Begay-Campbell said this solar project is one of the first in the nation on an Indian reservation and can be used as a model for others.

"I consider this program a success. It's cutting edge. That's why people are so interested. It hasn't been done before. It's ahead of most, if not all, of the tribes," she said.

Begay-Campbell emphasized that these homes are off the grid as opposed to large solar projects where homes are on the grid.

"This is a way to choose living off the grid," she said. "You get to live where you want, which is big for Navajos."

Begay-Campbell, who has a master's degree from Stanford in structural engineering, said she would like to see this program expanded, but that depends on the funding.

This technology can be expensive, but it allows Navajos to get solar energy where they live and Begay-Campbell said it fits in well with the culture.

NTUA made funding available for these alternative energy projects.

"NTUA is a leader among rural solar users," Begay-Campbell said.

These solar homes are spread throughout the Navajo Reservation, but many are in the Kayenta area.

NTUA has a "Power from the Sun" video to inform customers of the program to see if they want to be involved.

The solar project has gained notoriety through congressional visits, a visit by representatives of the Mexican government and the involvement of Native American college interns.

Begay-Campbell's suggestions for the future include more funding for solar projects, but also developing other renewable energy sources such as wind farms, biomass at an old sawmill plant and distributed energy resources for clusters of remote homes.

The plan is also consistent with Hopi values for land and water conservation as well as protecting air, water and wildlife.

Councilwoman Masayesva said the benefits to Arizona include offsetting emissions, not using any water and providing cost effective electricity.

Two windmill projects are planned. The first would be the Sunshine Wind Park, east of Flagstaff near Twin Arrows. Foresight Wind Energy is the project developer and construction is planned for 2006.

The Clear Creek Wind Project, located south of Winslow, has a $200,000 grant from the U.S. Department of Energy to have a one year feasibility study.

Foresight Wind Energy is serving as the technical advisor.

Masayesva said the Clear Creek Wind Project could create jobs and internships during the feasibility studies; jobs for construction and operation; and higher education opportunities for renewable energy.

Michael Connor, Democratic counsel for U.S. Senate Energy and Natural Resources Committee, told the crowd that the energy bill that President Bush signed Aug. 8 is a good bill, but not a great bill for tribes.

Connor said the bill was a missed opportunity to take on a higher level of renewable electricity and address climate change.

"Indians are ten times as likely to be without electricity on reservations," he said.

But Connor points to many good parts of this massive bill. The Office of Indian Energy Policy and Programs at the U.S. Department of Energy was authorized at $20 million per year. This will help tribes with grants, technical assistance and loan guarantees for energy

According to this bill, there was a new tribal energy resource agreement program to promote tribal sovereignty through energy projects on tribal lands.

It calls for the development of a Tribal Environmental National Resource Center.

Interior to obtain rights of way on Indian land for pipelines and electricity transmission lines. The Tribal Energy Resource Agreement (TERA) would allow for tribes to take over sole authority for energy leases such as rights of way.

Connor said while Republicans and Democrats in Congress deserve equal praise for supporting this that President Bush opposed it.

"The administration is concerned that language in Section 503 could create new, expensive

breach-of-trust claims against the United States and therefore urges the Senate to either delete this language or revise the overall language to make it clear that nothing in the Indian energy section of the bill is intended to expand existing liability with respect to Indian energy Development," the document states.

So, Connor said tribes are concerned that the study is the first step to eliminating tribal consent requirement for rights-of-way.