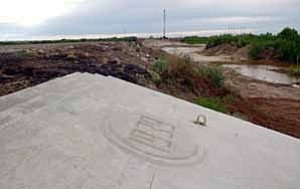 <i>Photo by Jeff Pope</i> <b>This cement block with the date the previous bridge was constructed will be placed in the First Street Pathway.</b>

The Route 66 bridge that allowed millions of travelers to cross the Little Colorado River since 1939 is no more. The Arizona Department of Transportation is replacing the bridge with one that will handle the increased loads of modern day semi-trucks.

Carl Ericksen, Resident Engineer for ADOT in Holbrook, said plans call for the new bridge to be open in March 2006.

"It'll be substantially improved road rating-wise. It'll be able to handle higher loads than the previous bridge and of course it'll be new," he said.

However, one piece of the bridge will be preserved. A cement block akin to a corner stone of a building will be placed in the First Street Pathway. The block contains the date, 1939, the old bridge was completed.

Ericksen also said plans to rebuild the I-40 interchange at North Park are set to bid in early September and that it typically takes about one month to be awarded. Depending on the length of the bidding process and winter weather, demolition may not begin until next spring.

TRAVELER ALERT: I-17 closed at Carefree Highway this weekend for bridge demolition
Which way do we go with downtown project?
Monument piece a part of historic LCR bridge
Walking a new Pathway
Affeldt enters mayoral race in recall election