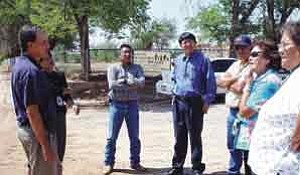 Byron Poocha,/TC District Media Congressman Rick RenziÕs representatives, Jim Lester and Walter Phelps, met with Tuba City District officials on Aug. 5 to see firsthand the seriousness of the deteriorated, potholed condition of Main Street. Both Phelps and Lester agreed that the road was in serious disrepair and vowed to assist the TC District to look into state funding to fix the road that is under the jurisdiction of the BIA. Louise YellowmanÕs Coconino County office, along with Ron Begay, TC District Support Services, also provided assistance.

TUBA CITY -- The holes are anywhere from 20 to 30 inches across and they are up to seven inches deep. There are 83 of them on the 2/10ths of a mile section of Main Street in Tuba City. The road is 2 miles long and is of one of the most heavily used roads in town.

Main Street in uptown Tuba City provides access to the Tuba City hospital and hospital emergency areas, to three of the Tuba City Unified District schools, the TC District administrative offices, to both hospital and school district housing, the TC bus transportation yard, north Tuba City housing near the Bennett Freeze area and circles the Tuba City Boarding School. But no one, particularly the Bureau of Indian Affairs, which has the jurisdictional obligation to maintain the area, wanted to repair these huge potholes.

As a result, residents, visitors, students had to drive daily over these 83 holes, for the past 18 months, ruining car tires and shocks and putting students who were walking to school in the morning and getting off of buses in physical jeopardy from cars trying to avoid the potholes. This made making the drive up Main Street one of the highest hazard driving areas in the Western Navajo Agency.

In a last ditch attempt to find someway to fix the road which was becoming a serious safety hazard for students, Tuba City District Office of Public Relations made a phone call to Walter Phelps, Native American Liaison for Congressman's Rick Renzi's office.

Phelps responded by telling the TC District PR office that he would be visiting Tuba City on Friday, Aug. 5 with Jim Lester, also a representative from Congressman Renzi's office, to visit the Tuba City Jail. He said he would make the time to meet with the PR office and the TC District Support Services Director Ron Begay to discuss the Main Street road situation.

At the meeting, Curley of the BIA did not offer to assist Tuba City District or any of the other agencies concerned with the serious condition road in either labor or materials costs.

As a result, the Tuba City District is going to pick up the costs of the pot hole repairs on Main Street Tuba City, as a service of safety for their students and staff members, but these repairs will also benefit the entire community of Tuba City and visitors making their way up this historic street.

The bulk of the materials to repair Main Street in Tuba City will be paid for from the Tuba City District Transportation and Maintenance Department and Phelps along with Lester said they will look into providing some kind of state assistance for a long-term road upgrade in the months to come that would be more permanent.