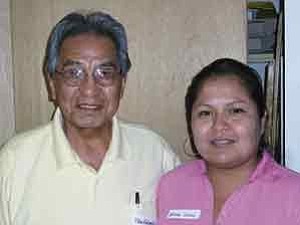 Discussions included the possible attractions and businesses the Shonto Community can build and how different governmental agencies might assist. The fact that the Shonto Community is not a destination community was brought up by Robert Black Jr., Shonto Chapter Secretary/Treasure. Black posed the question during his Saturday evening closing remarks of how the Shonto Community would develop areas such as the Cross Road area located northwest of Shonto on Arizona Highway 98.

Jonathan Nez, Shonto Chapter Vice-President had much to say about the legalities and policies the chapter would endure as it promote economic development in Shonto. Nez, who is working towards fund raising for community projects, has been working towards a strong intergovernmental relationship with the Navajo Nation and the State of Arizona.

Nez also stated the importance of community action and the need for community members to take initiative towards their self-governance, while maintaining a good working relationship with other governmental entities.