Back to school, back to work
The Bulldogs' fall teams begin practice this week with hopes of improving upon last year's success 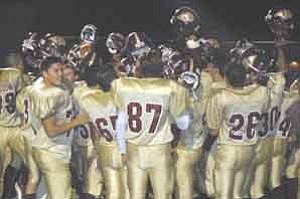 <b>The Bulldogs face Holbrook on the road on Aug. 26 to open the season.</b>

The Winslow High School Bulldogs football team will play five home and five away games during the 2005 regular season under new head coach Adam Larsen. Six of Winslow's regular season games are 3A North Region contests, while four are non-conference affairs with teams from the powerful 3A East Region.

Larsen succeeded Matt Gracey who had guided the Bulldogs to 3A North Region Championships and 10-2 seasons in each of the last three years. Winslow reached the semi-finals twice, losing to the eventual state champion both years.

The Bulldogs will open the regular season on the road at archrival Holbrook on Aug. 26. The Roadrunners compete in the 3A East Region and will be under the tutelage of a new coach this season.

The first home game of the 2005 season will be played on Sept. 2 with the Payson Longhorns providing the opposition. Payson returned to the 3A East Region after a two year stint in the 4A ranks. The Longhorns are expected to be one of the premier teams in the 3A East Region and in the state of Arizona.

Another archrival from the 3A East Region will provide a third straight test for the Bulldogs. The Snowflake Lobos will host Winslow on Sept. 9. The Lobos were one of two teams to defeat Winslow in the 2004 season and the only one to do so in regular season play.

The Hopi Bruins will be Winslow's first 3A North Region opponent on Sept. 16 at Emil Nasser Stadium. The Bruins have had limited success in football, but have always been known for their competitiveness.

The Bulldogs will journey north to take on the Monument Valley Mustangs in Kayenta on Sept. 23 in their second regional contest of the season. The Mustangs suffered through a down year in 2005, but are normally one of the better teams in the 3A North Region.

Winslow will remain on the road on Sept. 30 when the Bulldogs meet the Greyhills Academy Knights at Tuba City. Greyhills was a surprise state playoff qualifier last season.

The Bulldogs will celebrate Homecoming on Oct. 7 with their final non-conference game against the Round Valley Elks of the 3A East Region. Former Bulldog mentor Russ Semore got the Elks into the post season last year and one would expect this to be another tough opponent for the Bulldogs.

The Tuba City Warriors will be Winslow's 3A North Region opponent at Winslow on Oct. 14. The Warriors were a state qualifier last season.

The Ganado Hornets will host Winslow on Oct. 21 in the last road game of the regular season for the Bulldogs. The Hornets have been known to be one of the more dangerous teams in the 3A North Region.

The final game of the regular season will be played at Emil Nasser Stadium on Oct. 28. The Window Rock Scouts will be the opponents in what is billed as a "Senior Night" game for the Bulldogs.

The first round of the Arizona State 3A Football Championship Playoffs will be played on the home of the higher seed on Nov. 4. Subsequent play-off games will be played in the Phoenix area on Nov. 11, 18 and 25.

Prior to the regular season starting, the Bulldogs will participate in a controlled scrimmage with the Fountain Hills Falcons on Aug. 19 at Fountain Hills.

All game times are set for 7 p.m. except for the Monument Valley and Ganado contests which are slated for 6 p.m. kickoffs. The scrimmage with Fountain Hills and all state playoff games have times yet to be determined.