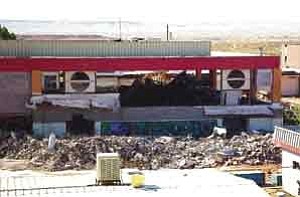 Photo by TC District Media Team <BR><BR> This 20-foot mural was painted by Hopi tribal member Burt Preston and was part of the original buildingÕs hallway. New mural artwork is proposed for the new high school buildings that will incorporate both adult and student art work.

Tuba City District #15 is currently in both demolition and construction phases at two of their schools. Tuba City Junior High School is winding down final construction on their new $4.5 million dollar, 17,000 square foot new cafeteria multi-purpose building which is slated for student use in mid-September 2005. Tuba City High School is in the final demolition phases of the old building that has been in use since the 1970's and will yield a new two-story, $6.5 million, 17 classroom building featuring state of the art technology access for all TC High students and staff by the beginning of the year 2006.