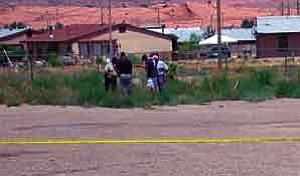 KAYENTA--At approximately 12:38 a.m. on July 26, Kayenta Police were dispatched to the Navajo Housing Authority's Black Mesa Housing in response to reports of a woman screaming. When police arrived at the housing complex, a woman identified as Anna Benally, 38, was found bleeding from various stab wounds to her body.

According to reports, Benally got off work from the Kayenta McDonalds restaurant and was given a ride straight home by a fellow co-worker. Benally was entering her family's home when she was surprised by an attack from an unidentified male. Benally and her assailant struggled over the attacker's knife while Benally screamed for help. Her family and other neighbors rushed to her aid as the attacker fled the scene. Kayenta Navajo Nation Police later apprehended a suspect near Draper's Glass Company.

The suspect was found by his vehicle a few hundred yards away from the attack scene and was questioned by police. He denied involvement in the attack, but was found to have cuts on his hands and other undisclosed items that made him a suspect in the crime.

Benally was flown to Flagstaff Medical Center where she received care for her stab wounds and a severed fingertip. The suspect--who was listed only as a victim due to his wounds--was flown to Phoenix Good Samaritan Hospital for treatment.

Later in the week, on July 21, the suspect admitted to Navajo Nation Criminal Investigation officers that he was the attacker in the crime. Police have identified the man as Stanley Herder Sr.

Navajo Nation Criminal Investigations and the FBI are investigating this crime, which falls under the Major Crimes Act and is therefore a federal case.